The News Commenter has the scoop.

There's a lot of buzz on the ground about a communist group that's bussing members into Ferguson from Chicago. The Revolution Club Chicago members provoked the police with Molotov cocktails the night of August 13th while the local protesters peacefully protested. That's when police then responded with gas and flash grenades. Their reported goal is to make the protests go super-violent, spread across the region, and spark a revolution. They are said to visibly stand out from the local protesters in how they respond to police and intimidate reporters when photos and video are taken of them... 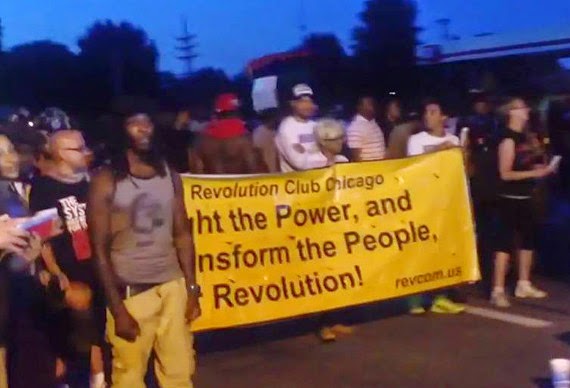 The protestors have received reinforcements from around the country. On Tuesday, Black Panther members were spotted in the crowd. On Wednesday, members of the Revolution Club of Chicago took turns inciting the protestors with messages through a megaphone.

Revolution Club Chicago, according to its Facebook Page, is a small collective of pro-genocide and pro-Islamonazi rabble-rousers. I'm guessing they're also big fans of Alinsky. Kinda like you-know-who.

Obama and Jarret's little pets, they be doing the cloven/piven act. Impoverish and demoralize inner city Americans, disrupt every facet of their culture and family life, turn them into government plantation slaves, the media and politicians use them as pawns, lie and brainwash them its because of racism, have race baiters and race merchants like Jackson, Obama and Holder point the blame for the manipulation and deceit on other innocent Americans, then when these pawns decide to fight back for their Liberty and dignity, send in thugs to incite violence and turmoil using cops who have been armed to the teeth and indoctrinated by the very dame people of the regime running our government.
If you haven't figured it out, it is war being waged on every single American by but a few hundred incredibly evil diabolical psychopaths in power.

If you think what I'm saying here is not the truth, just wait, cause these tyrants are going to come after everyone when they finish with this stage of their agenda to "fundamentally transform" America.
These evil men use mayhem and getting everyone to go for each others throats, it enables them to use false flag events and manufactured crisis's to do even more evil things they could not do otherwise, and will not stop till they are stopped.