CONGRATULATIONS, TEXAS: Valerie Jarrett Working Behind the Scenes to Cede Your State to Mexico

President Jarrett is reportedly the driving force behind a campaign designed to turn Texas blue through illegal immigration, thereby ensuring that all presidential elections end up with a Democrat victor.

According to Capitol Hill sources, de facto president Valerie Jarrett wants Texas and its 38 electoral votes... badly. More troubling is she has apparently been working very hard to make the state turn blue in the very near future, a result that would finalize far left control of the United States in every national election to follow. Jarrett is doing so with a combination of hundreds of thousands of recent immigrants flooding the state, combined with billions of dollars in federal giveaways like Obamacare that will unofficially pledge those new votes to the increasingly far left/progressive/globalist Democratic Party...

... “She is invading Texas with the clear intent to take it over. Look at the public campaign w/La Casa Blanca. That’s her campaign. That is the more immediate primary purpose of his executive amnesty. They’ll have Texas and that means they’ll never lose another national election. Ever.”

...The above tweet originated from the La Casa Blanca office, and was then re-tweeted from Jarrett’s own account as well. Within hours of the La Casa Blanca tweet, Jarrett was sharing her views on how wonderful Obamacare is for all Americans – including immigrants. 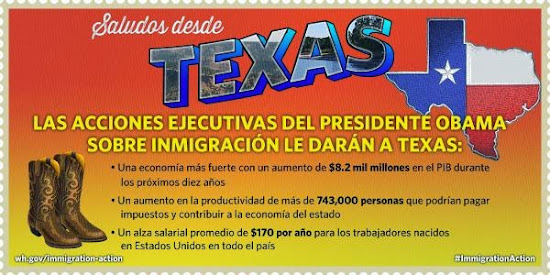 Here's the other version of the postcard Jarrett didn't show Americans. Texico, here we come!
Jarrett is hinting at 743,000 “more people” immediately coming into Texas via the president’s executive amnesty. Logic dictates that within just a few more years this number would easily surpass the one million mark (and likely already has) – a coordinated invasion via the federal government into the only state that gives voters a choice between Republican and Democrat in national elections. The only state that makes such a choice have any semblance of being competitive.

One million votes represents the difference between Texas giving a Republican its 38 electoral votes in a national election or those votes going Democrat. It is the difference between Texas being a blue state, or remaining a red state. Valerie Jarrett has been working very hard to permanently alter the Texas electoral landscape to ensure it forever after favors far left Democrats in future elections.

Barack Obama will fade into political obscurity after 2016, but Valerie Jarrett’s manipulations will continue to impact the country for many more years to follow, and taking Texas is a top priority in that long range plan...

Hopefully, the Court will rule in favor of the 26-27 states who have sued the DHA for the costly financial impact Obama's unconstitutional amnesty.
Every American should be contacting their two Senators NOW and telling them that, to honor the oath they took to protect and defend the Constitution, they MUST VOTE YES ON HOUSE BILL 240 (the House's Bill defunding DHS's activities implementing Obama's unconstitutional amnesty. If they won't do it for the sake of Americans, they should do it for their children and their children's children. Freedom, once lost, is seldom ever recovered.

We Texans were told that with the ten year influx of those liberals fleeing the bankrupt blue states, that we would be blue by 2014. What happened?
In 2012, Mitt Romney took more votes than John McCain did in 2008, while Obama took fewer votes in 2012 than he did in 2008 and lost three traditionally blue counties.
We currently have about 2 million illegals inside our state, but we have more Tejano (Texas born Hispanics) in our Congress than any other state. Our new first lady, Cecelia Abbott, is Hispanic and Greg Abbott, along with our Lt. Governor, Dan Patrick, took 44% of the Hispanic vote. Patrick took 50% of the male Hispanic vote.
Do we need to worry? Of course, but when Obama sent his top-notch field campaign manager, Jeremy Bird, to run Battleground Texas and manage Wendy Davis' campaign, it is a clear sign that Texas Republicans are on top of the dirty tricksters. Bird is now the Obama guy who started V-15 in Israel to defeat Netanyahu. Let's hope his success there is as good as it was in Texas with Wendy Davis.
Ms. Jarrett just might find out what "Don't Mess With Texas" actually means.

We have more Tejano (Texas born Hispanics) REPUBLICANS in our state than any other state.

Dear God, I hope you're right, Anonymous Texan, or the republic is truly screwed.

As a Texan, methinks Ms Jarrett should be looking for a hole to climb into. Is not going to happen without.................. God Bless the United States of America and the Republic of Texas.