Over at Rasmussen, the pollsters have discovered that -- for the first time in history -- self-identified members of the Democrat Party now view socialism favorably.

The man currently running a distant second for the Democratic presidential nomination, Vermont Senator Bernie Sanders, is a self-declared socialist, and most of his party’s voters now have a positive view of socialism. They are almost evenly divided as to whether they like capitalism or socialism more.

Socialism, Communism, Maoism, and National Socialism (e.g., the Nazi Party) are all offshoots of Marxism. They are all branches of the same defective tree.

Marxism has failed in literally every venue it has been tried, despite progressives' laughable efforts to claim certain countries have implemented it successfully.

No country has and no country ever will, because -- as Margaret Thatcher sagely observed -- "[the] problem with socialism is that eventually you run out of other people's money". 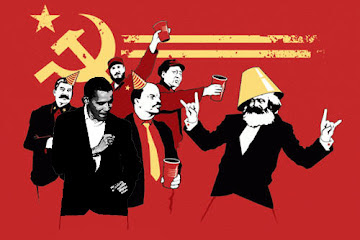 And those who point to the "success" of European countries that still maintain the semblance of civil societies have yet to see the Marxist endgame play out:

• All of these states have rung up immense and unsustainable levels of debt thanks to the socialists' endless wealth redistribution schemes. Only a series of elaborate can-kicking exercises have kept the European Union from economic collapse.

According to a study conducted by academics at the University of Hawaii, Communism in the 20th century alone led to the murders of 110 million men, women and children.

Isn't it ironic? When it comes to their own ideologies like climate change, progressives like to shut off debate by claiming that "The science is settled."

In this case, the record of history is settled. Marxism and it descendents have failed in every situation and in very region across the world.

That the majority of Democrats could embrace such a twisted political philosophy is an indictment of not only our media, but also our failed, union-controlled educational system.

They can't or won't appreciate the intricate system of government created by our Framers that inarguably built the most magnificent economic miracle in human history. They live in the lap of luxury, unappreciative and stupefied, unable to explain how even the lowly pencil is made in our society.

Where are all of the Hollywood and Lefties who continuously praised Venezuela's Socialism now that we've learned Chavez's daighter is a billionaire and the average Venezuelan citizen is living in poverty and has trouble getting electricity, food, gas, toilet paper, and other basic needs.

Uhrm, bzzzzz. Wrong. They are simply, with such access to power and so many policies opening up the future of that, admitting it openly. They have always been on the wrong side of history. It started out as a cheap way to buy votes. Then they started actually believing their own garbage. And it will either end with genocide against them and most of us, or a repatriation of those they have had to bring in to support their vote buying that turned into a belief and the loss of their rights to be involved with politics, perhaps even being excluded from owning businesses or other assets of profit.

I'll be their Huckleberry. *wink*

Socialism is the ideology that society would be better when everyone is forced to live at the expense of everyone else. By its very nature, this requires the use of government coercion and is based on institutionalizing the violations of the Ten Commandments that forbid coveting and theft. That society would certainly be better off is a demonstrable lie. Socialism is also provably "unsustainable" from an economic standpoint. In the last century attempts to impose socialist societies have cost over 100 million lives.


"110 million," funny how that is presented like a large number. Since 1973, the United States has legally allowed almost FIFTY-FIVE MILLION abortions. Kind of makes the 110 million seem like a paltry sum. I bet if we give Planned Parenthood a couple more decades they can lay claim to "killing" more than all the Marxist countries from the 20th century have murdered. The Liberals have embraced Socialism because their ties to humanity have been destroyed and now they suck from Baal's teats with enthusiasm!

When young people today say they support socialism, they're not thinking of the USSR, but of the Nordic model welfare state. It's capitalism with the addition of some large government programs (particularly healthcare) that we don't have in the States. It has a far better track record in terms of quality of life, overall happiness, and market stability than our system in the States. It is far from a failed system.

Conversely, younger Americans feel that Reaganomics has indeed failed them and the test of history, and its time to put it out to pasture and catch up to the rest of the developed world.