It didn't take long for the loons at ThinkRegress to begin attacking the memory of the 20th century's greatest president. The culmination of their effort -- '10 Things Conservatives Don’t Want You To Know About Ronald Reagan' -- is a list of Reagan's policies that conservatives supposedly want to hide from the general public.

Reagan was not the man conservatives claim he was. This image of Reagan as a conservative superhero is myth, created to untie the various factions of the right behind a common leader. In reality, Reagan was no conservative ideologue or flawless commander-in-chief. Reagan regularly strayed from conservative dogma — he raised taxes eleven times as president while tripling the deficit — and he often ended up on the wrong side of history, like when he vetoed an Anti-Apartheid bill. 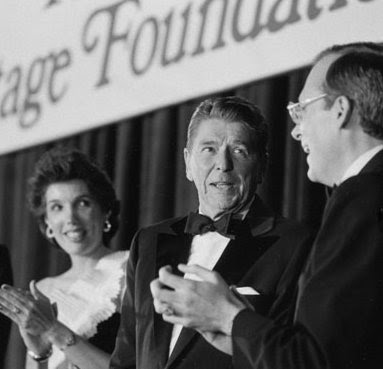 " 1. Reagan was a serial tax raiser" - Reagan suffered from overwhelming Democrat majorities in Congress when he took office. While he desperately wanted to strip away huge swaths of government (including eliminating the then newly created Department of Education), he had no choice but to compromise with the Democrats who controlled the budgetary purse-strings. When Reagan left office, the top marginal tax rate was 28% (today's it's 35% and under Bill Clinton it was nearly 40%).

"2. Reagan nearly tripled the federal budget deficit by enacting a major tax cut his first year in office and government revenue dropped off precipitously" - Another flat-out lie. Before his 25 percent across-the-board cut in individual income-tax rates went into effect, government receipts from individual income taxes trickled in at $244.1 billion. The year Reagan left office, they totaled $445.7 billion -- an 82 percent jump. As for the deficits, Democrats outspent every one of the nine budgets Reagan proposed but one. Further, Democrats refused to make corresponding cuts in wasteful domestic programs to offset the defense appropriations Reagan needed to combat the Soviet Union after the Carter administration's foreign policy disasters (e.g., Iran, Afghanistan, et. al.). 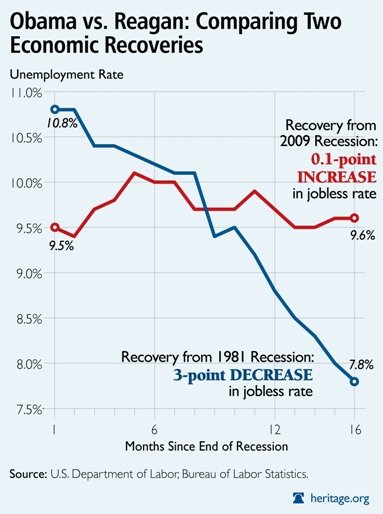 "3. Unemployment soared after Reagan’s 1981 tax cuts" - Before the full tax-relief package was passed -- against the wishes of many Democrats, by the way -- the jobless rate hit 9.6 percent. But as the cuts rippled through the economy, unemployment dropped every year after 1983, reaching a low of 5.3 percent in 1989. And tax cuts benefited minorities, too. The jobless rate among blacks plunged from 19.5 percent in 1983 to 11.4 percent in 1989.

"4. Reagan grew the size of the federal government tremendously" - this again omits the role of Congressional Democrats who controlled the purse-strings and refused to axe the programs and agencies that Reagan requested. In fact, the media portrayed Reagan as "heartless" and depicted him as "laughable and malevolent" for his attempts to strip away the federal bureaucracy. But the only way the Democrat Congress would accept a defense buildup and tax cuts was for Reagan to agree to their domestic spending agenda. In fact, the budget deficits of the 1980s made the surpluses in the 1990s possible; the balanced budget was aided by surging tax revenues from a healthy, low-tax economy and immense defense savings made possible by the fall of the Soviet Union.

"5. Reagan did little to fight a woman’s right to chose [sic]" - Reagan was adamant about ending the practice of 'abortion on demand' and proposed that legislation be drafted to do so (you can hear Reagan's 1983 address on this subject); but he "had little success in gaining its acceptance by Congress."

" 6. Reagan was a “bellicose peacenik.”" - this is sheer revisionist idiocy; Reagan believed, first and foremost, in peace through strength. He gave dozens of speeches on this topic, rebuilt the U.S. military after Carter had stripped it bare, and created the impetus for the oft-derided SDI ("Star Wars") program that has since become an essential part of U.S. national security strategy. His famous slogans on this topic were "peace through strength" and "trust but verify".

" 7. Reagan gave amnesty to 3 million undocumented immigrants" - The Democrat leadership in Congress promised to enact strict enforcement measures as a trade for a one-time amnesty deal. In an effort to control the border, Reagan went along with the deal. At the time (1986), the measures were marketed by Democrats as as being able to stop illegal immigration. Ted Kennedy himself sold the enforcement clauses of the law as strong enough to ensure that only a one-time amnesty would be needed. But, as is their standard practice, Democrats lied about sealing the border.

Reagan himself said, "This country has lost control of its borders. And no country can sustain that kind of position." 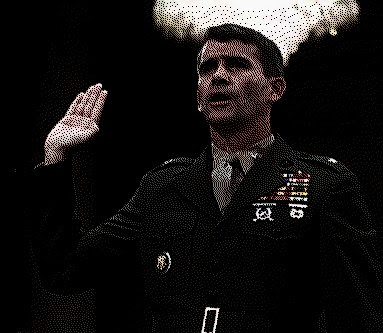 " 8. Reagan illegally funneled weapons to Iran" -Democrats launched a six-year, $40 million investigation of Reagan in a politically inspired witch-hunt. Reagan was, in fact, found guilty of absolutely nothing. Furthermore, indictments were intentionally handed down mere days before the 1992 election that pitted George H. W. Bush against Bill Clinton -- presumably to levy the maximum amount of political damage on the GOP candidate. Near the end of the investigations, The Baltimore Sun reported that a "federal trial judge in Washington dismissed Oliver North's conviction" and that "[c]riticism of Mr. Walsh's prosecution and of the law that authorized it will become more intense [because the] public has gotten precious little from his [at the time] $30 million, four-year effort".

"9. Reagan vetoed a comprehensive anti-Apartheid act" - Reagan vehemently opposed apartheid ("Apartheid is morally wrong and politically unacceptable [... the] United States cannot maintain cordial relations with [such] a government") but he did not support the approach advocated by Congress. He issued an executive order restricting trade with the Pretoria government and virtually ended inter-bank dealings. But he believed that Congress' unilateral sanctions would harm blacks most of all and eradicate all of the leverage he wanted to bring to bear on South Africa. He wanted a timetable for the elimination of apartheid laws, the release of all political prisoners (especially Nelson Mandela) and a removal of the ban on black political movements. He felt he could not negotiate with the South African government if he had nothing to trade. His 1986 speech -- "Ending Apartheid in South Africa" -- comprehensively described his plans and approach.

" 10. Reagan helped create the Taliban and Osama Bin Laden" - Gee, next they'll be complaining that we had to side with the Soviets to defeat the Nazis. This sort of leftist lunacy simply rewrites history. We needed to sabotage the Soviets' efforts in Afghanistan to prevent a dramatic power-shift in the Middle East. Blaming Reagan for the Taliban and Bin Laden is like blaming Henry Ford for the problem of too many scrap tires.

I hear the he was also responsible for global warming.

Some of that stuff is true. I have family that are now legal residents thanks to his amnesty program.