Strange. It's almost as if the Democrats and the media (but I repeat myself) coordinated their attacks on Michele Bachmann: 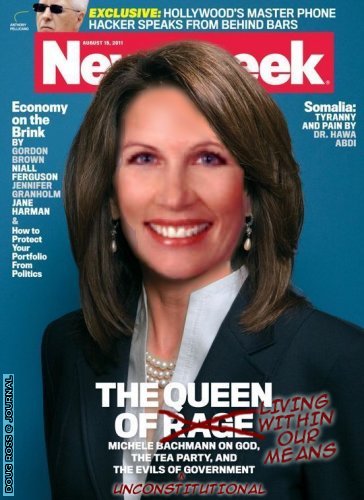 • ABC Spews: "Bachmann Likens US to Titanic in Visit to Iowa Plant"

• Discover (!): "Reason and the Mind of Michele Bachmann"

You're telling me that even Discover Magazine is slandering Michele Bachmann?

Well, Jon, this is a curious article to find in "Discover". Tell me:

If you answered 'the Democrat Party' to each question, you're today's winner!

Michele Bachmann is the problem? No. Out-of-control, unconstitutional, sixties-retread Democrats are the problem, spending trillions borrowed from our children and grandchildren without their permission.

The Tea Party is the problem? Hardly.

But facts, logic, history and reason were never strong suits for the National Social Democrats.


Just wait until we find out whether Sarah Palin is running.

Doom said...
This comment has been removed by the author.
3:51 AM

I wonder what they're calling Journolist these days.

Now they are called "journHOLEists," quite popularly.