The true amount of fraud laced throughout our nation's disastrous systems for redistributing wealth are unknown. By the government's own estimates, Medicare, Medicaid and Social Security Disability fraud amount to roughly $150 billion a year. The true amount is probably double or triple that.

As for unemployment insurance fraud, Tyler Durden reports that Louisiana is our grand prize winner.

...A stunning 28% of Louisanans who claimed benefits did so even after returning to work. However, while the Louisiana data points are bad, they are not alone. As the chart below shows... 16 states have "improper" payment rates of over 14%. One wonders why the world doesn't trust the US so much anymore? 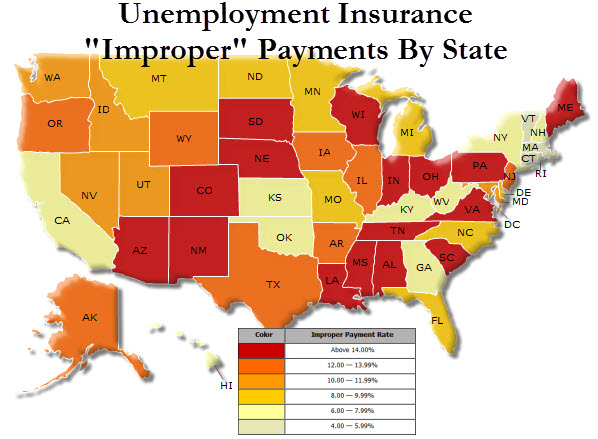 The data[,] from the Department of Labor, is from estimates based on results of State Benefit Accuracy Measurement (BAM) survey (random audits) of paid and denied claims...

Debt piled upon debt, fraud piled upon fraud, one leader without virtue after another... Long after the financial cyclone sweeps over our shores, historians will scratch their heads and wonder how Americans threw away the finest system of government ever invented.

I am not sure about the stats you claim in reference to SSI an other programs As to welfare the only people that can get it is women with offspring.

Our current 'crime syndicate' govt run out of 1600 Penn rots everything to a stinking pile of rotten fish beginning with them down to the lowest denominator.