3D-printed guns have been making the news a lot recently. That's not to say that they and their creators don't deserve the press — people arming themselves without so much as a permit is pretty terrifying. But whoever it was that said 3D printing was the only way for people to circumvent the law and arm themselves just might not have seen this bad boy. 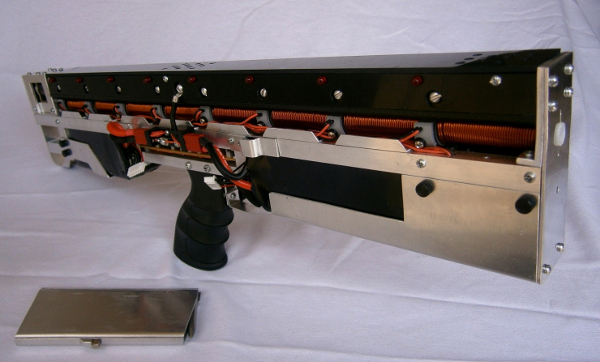 This fully-automatic Gauss gun, dubbed the CG-42, has a 15-round capacity and can fire an entire clip of ammo in 1.5 seconds. What it fires is almost as frightening as the gun itself, because the CG-42 is armed with nails, side-stepping the need for even the slightest of paper trails.

A Gauss gun, also known as a coilgun, is a battery-operated, electromagnetic linear motor which pulls a projectile forward faster and faster until it exits the weapon's muzzle, no gunpowder required. The CG-42 has a muzzle velocity of 138 feet per second, which doesn't sound like a lot until you see it put a nail right through a laptop's casing. Gauss guns also get more powerful the longer you make them, so a Gauss "rifle" would be capable of much more destruction...

The video at the link won't have anyone trading in their AR-15, but the technology does show a great deal of promise.

If I put this on my Amazon wish list, do you think anyone would get me one??