If that is her real name, of course.

Senator Ted Cruz, one of the most popular Constitutional conservatives to appear on the scene in recent years, is the latest target of the government-media complex. The ruling class is decidedly unhappy that one of their own is -- like Reagan and Coolidge -- talking about restoring the fabric of American society and reinvigorating interest in limited government. 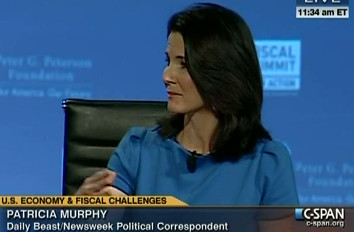 And therefore, just like clockwork, the enormously talented and accomplished litigator from Texas is now the target of a smear campaign not based upon facts, history or resume, but instead upon a character assassination by a single college acquaintance from his freshman year.

Leading the campaign is the usual state-run propaganda outlet -- the failed periodical once known as Newsweek and -- now operating under the alias Daily Beast. Its author, Patricia Murphy, relies upon a single character assassin (freshman roommate Craig Mazin) and a variety of anonymous sources to descend to "a new low for the genre and for modern political journalism."

And just who is the author, Patricia Murphy?

She's a denizen of the Beltway establishment, a product of the incestuous Democrat-media-federal government complex that exists to amass power and to perpetuate itself.

Patricia Murphy's resume is a disaster, befitting a failed career that leaves someone working at Newsweek. Put next to the C.V. of a man like Ted Cruz, Murphy's background is a pathetic joke.

Murphy, on the other hand, works for Newsweek. She is also the founder of the esteemed Citizen Jane Politics -- a self-described "non-partisan website for women" -- that is so successful it hasn't been updated in more than eight months.

Prior to working in "journalism", she was a staffer for Sen. Max Cleland. Cleland was the very forgettable, left wing enviro-kook who in 2002 -- thankfully -- was the last Democrat Senator from Georgia after getting obliterated by Saxby Chambliss.

In other words, Murphy is one of the political cockroaches who flits from left-wing government to left-wing media.

Her latest secretion, a thinly veiled political attack on Ted Cruz, appears designed solely to secure her next position as a staffer for another far left Democrat hack.

Feel free to retweet the message: we're on to you, Patty. We know this article is just another audition for a gig back in the cushy confines of the massive, bloated federal government.

I've had it with these people. Let this be a warning to you left wing hacks: I'm going on offense. When you attack patriots like Ted Cruz, I'm coming after you, rhetorically speaking. I've had it. I'm exposing you as the failed apologists for Statism that you really are.

...and you Doug, have the smarts and tools to beat her back into her cave. God bless you Son.

The Left is terrified of Ted Cruz!

An irritating, self absorbed, never-was who will pimp herself out for 15 minutes of fame.

Good job, Doug. There's going to be plenty more of that garbage coming down the pike, and we need strong and courageous people to knock them off their delusional pedestals.

It's not only the left attempting to smear Cruz ala Palin, but the establishment GOP as well. Don't be fooled.

But he is a east coast statist-all those ivy creds?
give me a break!

Ms. Murphy is brilliant, spot on in her investigative reporting, and sees more clearly than anyone in Washington. Watch out!!