Just when you think Bloomberg -- the idiot mayor, not the news service -- has reached the height of stupidity, he pulls something like this. 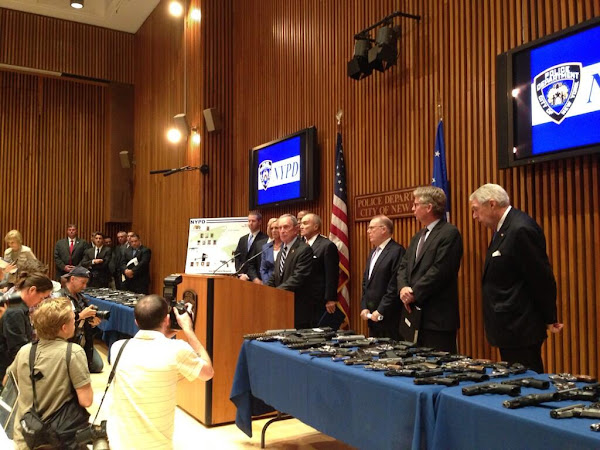 ...While we hope that the NYPD had the good sense to clear each and every firearm on display, what they failed to do is as undeniable as it is unforgivable. They clearly left magazines in, with bolts closed, on numerous firearms pointing at the press... 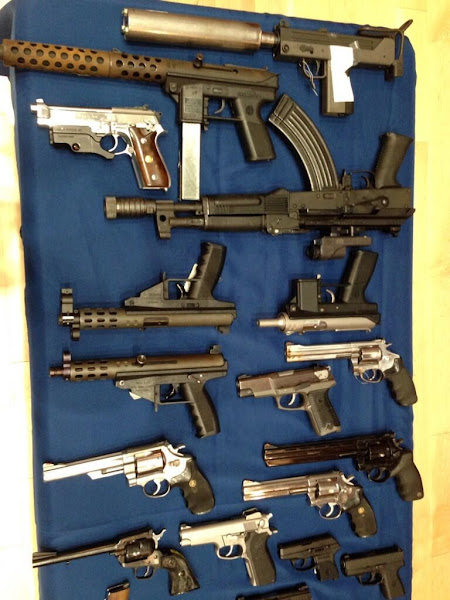 ...At least one of the guns picture above, third up from the bottom on the left, clearly has the bolt-closed and the safety off as it points towards the assembled reporters.

This is all done for control and effect and it is designed to engender a fear response in the dolts who think this is something to report.
We've seen folks stand behind doors or sideways on the road to relieve themselves but Bloomberg is the dude who chooses to urinate facing traffic. He is a nut job, a mental case, a whacko, a savant, a voyeur who can't get enough and nobody has the stones to tell him "no".

Too bad they didn't all go off at the same time.

Maybe in the case of these people, gun control isn't such a bad thing after all.

It has the effect of keeping the reporters on edge about guns...manipulating a fear response. On purpose? Who knows, but I wouldn't put it passed them.

The AK shortie near the top has the safety on, the S&W 659 has its "decocking lever" down. The TEC industries third from bottom on the left has bolt forward and safety off, but if its a true Class III, it may fire from an open bolt, in which case it's only a problem with the bolt back, and a round ready to go

But no matter, I wonder if anyone present had the legal right to have any Class III including that MAC10 with the can, -er suppressor, on it.

They only put up a display of fun stuff that made me wish I had them all. I have enjoyed shooting for all the many thousands of rounds I have gone through.

Ever notice that a single box of stolen ammo can keep a thug supplied for a lifetime career, but they caome after my kind because we actually buy lots.

LMAO at those clowns...