Obama's Dog Gets More Air Support Than the Heroes at Benghazi


Leadership: We may not know who gave the stand-down order, but we do know the First Family has a second Portuguese Water Dog. Will it too be airlifted on a Marine aircraft to Martha's Vineyard?

The breaking news on Monday was not a new revelation about the National Security Agency, the IRS, Benghazi, Fast and Furious, or the pending collapse of ObamaCare. 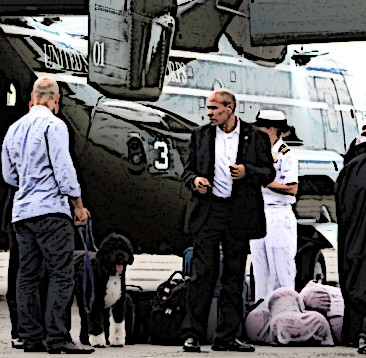 It was that President Obama and his family have adopted a companion for first dog Bo. The new presidential pet is called Sunny, a name obviously not picked because it reflects the future of America under this administration.

"We suspect Sunny will follow in Bo's footsteps and keep the president company in the Oval Office, go for walks with the first family after their 6:30 family dinner and even jump up on the first lady's lap from time to time," a White House spokesman announced to a world still waiting to find out what the president was doing the night of the Sept. 11 Benghazi terrorist attack other than play cards with presidential "body man" Reggie Love.

If Sunny does follow in Bo's footsteps, he'll soon be privately airlifted, as was Bo, to Martha's Vineyard aboard a Marine MV-22 Osprey, a helicopter that operates at a cost of $11,000 per hour. Bo was given a ride on one of two MV-22s that took various personnel on the trip with the Obamas and arrived ahead of them.

When the administration guts the defense budget to the point where training and military readiness are suffering, why are scarce military aircraft being used at all on a presidential vacation and why is the presidential dog being ferried on one?

At least Mitt Romney took his pooch on a trip in a doggy carrier strapped to the roof of his private car, a story that got a lot more attention than this one.

Some have suggested this is a nonstory, that Bo did not fly alone but with staff, Secret Service and other personnel required for the trip. We think there is a story here, considering that a couple of Ospreys loaded with Marines or any other military personnel would have been useful in Benghazi. 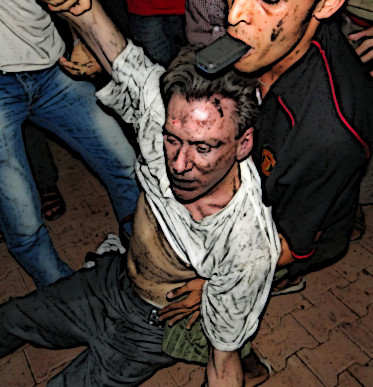 The V-22 Osprey has enough capacity to carry as many as 24 troops seated or 32 without seats. The Marine Corps' MV-22 is a specialized derivative of the V-22 Osprey, which has had a troubled history and which the president of the U.S. technically is allowed to ride on.

Like its combat-ready counterparts, which have already logged more than 10,000 flight hours in Afghanistan, the MV-22 is a tilt-rotor aircraft capable of both vertical takeoffs and forward flight using a pair of rotating turboprops.

During the Osprey's initial flight testing and development phase, the aircraft earned the nickname "the Widowmaker," given its habit of falling out of the sky.

Current versions are safer and more reliable, yet the presidential Osprey has not yet been designated a "white top," meaning Obama is not allowed on board.

We wonder if the Secret Service knows about that.

It was the first time the Ospreys had been taken on holiday by a U.S. president. We are reminded of the Americans left at the Benghazi consulate and annex to fend for themselves, or die as air support was denied. One U.S. hero, David Ubben, suffered for 20 hours with a shredded leg in Benghazi before help arrived.

"Hard-working folks are getting furloughed, families getting by on less, fewer ships available for your training exercises, the commissary your families rely on closed a day a week," Obama declared in an Aug. 7 campaign-style speech delivered to U.S. Marines.

"We can do better than that. That's not how a great nation should be treating its military and military families."

Took the words right out of our mouth.

Do you know how much work it takes to train a dog to act like a well behaved child for someone else?
Barry and Mooch didn't have to raise it. Sasha and Molika didn't have to feed it or clean up after it. They didn't have to keep it from chewing up their stuff nor were they responsible to bring order into its life. They didn't lift a finger to train it but now it is their new family member and we pick up the tab to fly it around.
Barry talks about fairness but he, like a slave owner enjoys a privileged life. It's no different than how he grew up, the dude is a pox but we are the ones getting the rash.