This article describes an Information Warfare Operation being orchestrated by the Left.  It is characterized by well-designed themes and memes, effective delivery, and advanced with MSM propagation. 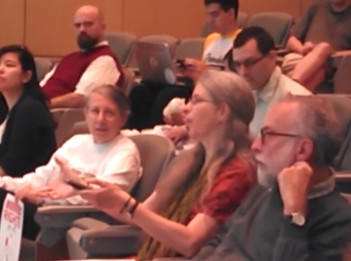 Not too confrontational, it uses fundamental American emotional buttons: family, kindness, and compassionate justice. It worms its way into the national psyche, one snippet at a time. The operation is funded, organized, and supported by the usual suspects; it’s coordinated with press organizations to carry the themes forward and propagate the message for as long as possible.

It starts with a question like this: “What are you going to do to stop the separation of families, for those of us that live in fear everyday due to unjust deportations?”

It’s a well-crafted question – a clever riposte for which we have not an effective parry.

We are at war. Our efforts just do not match the opposition. We should have had a response packet put together before the meetings took place. To know what the Left is going to do, just visit their sites and blogs. They tell us their plans, and we’re still unprepared.  We need to plan for their campaigns, collect intelligence, and anticipate the obvious.

Planning would enable this sort of exchange:


Valeria Ruiz, 17, of Racine, Wisconsin, prodded her congressman on deportations that divide families. According to the Facebook page of Voces de la Frontera, a Wisconsin anti-deportation group, she asked Paul Ryan, “What are you going to do to stop the separation of families for those of us that live in fear everyday due to unjust deportations.”
Ryan responded: “Welcome Valeria, I was looking forward to you coming this evening.  Did Voces de la Fontera or La Raza drive you? I hope your folks are well. I have one question for you.  Your parents are citizens. Your father Miguel was naturalized in 2004 and you mom has always been a citizen.  Who are you specifically referring to?  Can you define what an ‘unjust deportation’ is?”
The rank-and-file Left does not understand Operational Security.  Their leaders do, but their leaks and chest thumping on Facebook and blogs give us enormous insight. There we can learn what they plan to do before they do it.  That is called Predictive Battle-Space Awareness.  We should have been using it for a long time.

If the socialists win the next presidential election, this will no longer be a war of words.  It will be a war of survival, a war in all its manifestations. Why do you think they are building a domestic army? In a few years it will be formidable.

Robert Louis Stevenson said, "Sooner or later in life, we all sit down to a banquet of consequences." The debacle of the city of Detroit is the glaring reality of Leftist polices and the emerging consequences are writ large for the nation.
We fight or we perish, becoming a Detroit nation; lawless, corrupt and hopeless. We become helpless before tyrants who once were smiling politicians full of good will and earnest concern.  We are already a good distance down the troubled road to that outcome.

Within the Leftists’ ridicule and posturing, and behind their histrionic stage dramas and concocted causes, can be heard the rattle of chains.


Abernathy Crum is, by decades of training, experience and teaching, an expert in the strategy and tactics of information warfare deployed by tyrannical regimes throughout history.   Special thanks to Lee.