Mideast: Christians in Egypt are again the target of Islamist Muslim Brotherhood supporters using the new violence as a cover for ongoing persecution. If Christians were burning mosques, the world would be outraged. 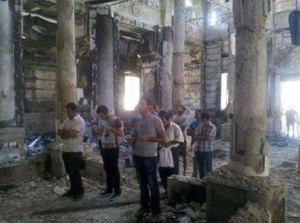 Amid the raging violence in Egypt, a less-publicized war is being waged against Egypt's long-persecuted Coptic Christians, this time using the excuse that they were somehow involved in the military's ouster of the Muslim Brotherhood's Mohammed Morsi from power.

Coptic Christians comprise up to 10% of Egypt's 84 million people.

Ishaq Ibrahim from the Egyptian Initiative for Personal Rights group has documented as many as 39 incidents of violence against churches, monasteries, Coptic schools and shops in different parts of the country within the past few days. They include Thursday's torching of the Prince Tadros Church in the province of Fayoum, where three similar attacks occurred on other churches the day before.

Islamists firebombed the Mar Gergiss Church in Sohag, a city with a large community of Coptic Christians, burning it to the ground. Islamists previously raised an al-Qaida flag over the church.

Another two places of worship, the Churches of Abraham and the Virgin Mary, were attacked in El-Menia province, leaving them partially damaged by fire. St. Theresa Church in Assiut in Upper Egypt was also burned.

It was on May 8, 2011, when Islamists stormed and set ablaze that same Virgin Mary Church in Cairo, shouting: "With our blood and soul, we will defend you, Islam." At that time they also burned down nearby homes occupied by Coptic families, killing a dozen people and wounding more than 200.

It's true the Coptic church backed Morsi's removal, with Coptic Pope Tawadros II appearing alongside army chief Gen. Abdel Fattah al-Sisi as he announced the military action on July 3. But as Andrew McCarthy pointed out in National Review, Sisi also gathered by his side significant Islamic supremacist leaders and prominent secularists in opposition to Morsi.

"These guys have been blowing places up and killing people in Sinai," Michael Meunier, president of Egypt's Al-Haya Party and a Coptic Christian, said of Islamist attacks against Christians since Morsi's fall. "They've been attacking churches all over Egypt — putting al-Qaida flags and Morsi's pictures on churches, so there is no question the Brotherhood are the new terrorists."

Coptic support, however, was not violent. "I appeal to all to preserve lives of fellow Egyptians, with restraint to prevent violence and reckless attacks against any person or place," Tawadros tweeted. In fact, the campaign of arson and murder targeting Coptic Christians long preceded Morsi's election and removal.

On April 7, two Copts were killed and 84 injured by a mob using guns, wielding machetes, throwing stones and possibly hurling Molotov cocktails at mourners exiting St. Mark's Coptic Orthodox Cathedral in Cairo. The worshippers were mourning the deaths of four Copts in an April 4 attack in Khossus in which a nursery and church were burned.

An investigation into the October 2011 attack on Coptic Christians in Cairo's Maspero district, leaving 30 dead and more than 500 wounded, was shut down by the Morsi regime. In the Egypt of the Muslim Brotherhood, Christian lives mean little.

As the administration quibbles over the definition of a "coup" regarding Egypt's military aid, we are reminded the U.S. and NATO went to war over the "ethnic cleansing" of Muslims in Bosnia. What will be our response to the ethnic cleansing of 10% of Egypt's population?