Egypt, Syria, Libya, Tunisia, Iran: since the ascent of Barack Obama to the presidency, a series of baffling and bizarre decisions (and non-decisions) on the part of the administration have left the Mideast awash in violence and misery.

Which explains the U.S. Marines preparing for WMDs in improvised explosive devices (IEDs): 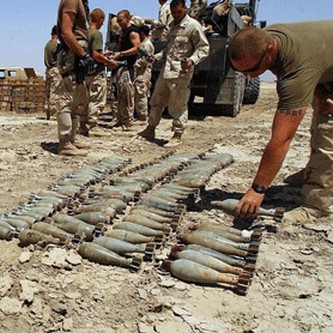 To date, such improvised explosives have not been a credible threat on the battlefield, especially in improvised explosive devices. In Iraq, a few failed attempts were made using industrial chemicals, but the Marine Corps considers improvised WMDs a threat that’s likely, according to a contract solicitation from the service seeking assistance in developing this new training.

Marines with 1st Explosive Ordnance Disposal Company at Camp Pendleton will attend the new Weapons of Mass Destruction Design and Defeat Course in October. The goal is to improve EOD techs’ chances for survival should they encounter improvised WMD, and help deployed forces adapt to the threat.

It is a matter of time before improvised WMD are used against U.S. forces, says Steven Bucci, ... a retired Army Special Forces officer, said attempts in Iraq demonstrated the enemy’s willingness to use them. All they lack are the materials, and failing states like Syria, which possess weaponized chemical agents, could provide them.

Improvised WMD would most likely incorporate chemical agents, Bucci said. While they are difficult to manufacture and weaponize, much of the work is done if enemy forces obtain chemical weapons from an unsecured national stockpile — artillery shells, for example.

“The bad guys know how to detonate artillery shells as IEDs,” Bucci said. “They did that in Iraq and Afghanistan. If they are chemical weapon shells or warheads, then you have a potential problem. So while that has not been a particular threat in the past — other than these lame attempts in Iraq — if they can get some of these things out of Syria, the possibility of creating chemical IEDs goes way up..."

Which reminds me: Hillary Clinton is the greatest Secretary of State ever.

There is nothing 'baffling and bizarre' about the Obama/Hillary Weiner Clinton decisions in Egypt.

No puzzle here. We have an enemy of the state in the White House.

We had a drunk putz as a Secretary of Inebriation. With Kerry taking her place, we now just have a putz.

The enemy lives at 1600 Pennsylvania Ave - infiltraded by jihadist MB's and their supporters - like Huma, Jarrett, Brennan etc....nothing new there.

While we are paying attention to the hotspot in Egypt, we ignore the southern border being wide open for Hezbollah jihadist and their likeminded ilk.