We have now experienced five years of Obamanomics.

The results have been, in a word, catastrophic.

Here's an open question for any liberal reading along (and by that I mean you, Carlito, among others): how many more failed experiments in central planning, including the $1 trillion "Stimulus", Obamacare, Dodd-Frank, nationalization of the student loan business, "Cash for Clunkers", open borders, etc. will you tolerate before you finally declare that this regime's Marxist agenda will only end in misery?

How many more failures will you accept before you put your children above your religion of Statism?

Please consider Exhibit 4,806 in a series I call "Legacy of Failure - The Results of Barack Obama's Marxist Agenda":

President Obama’s policies have devastated all age groups, but the most heartbreaking impact is on the young:

Gallup reports that, “The lack of new hiring over the past several years…seems to have disproportionately reduced younger Americans’ ability to obtain full-time jobs.” ... According to Gallup’s “Payroll to Population” measure, fewer Millennials were working full time in June of 2013 than in June of 2012, 2011, or 2010... A recent 2012 Pew Research Center study found that 36 percent of the nation’s Millennials were still living with their parents. 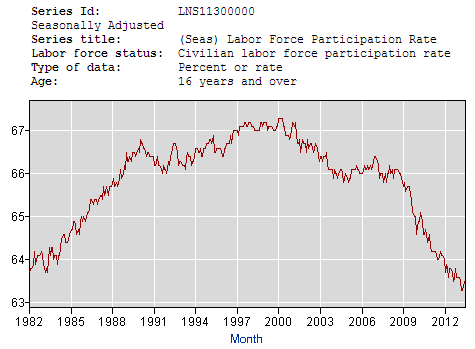 Millions of older Americans have responded to the lack of job opportunities under Obamanomics by becoming “disabled.” Based on disability statistics, you would think that Americans have suddenly gotten sickly, or perhaps that we have been fighting a war:

A study from the Federal Reserve Bank of San Francisco also attributes the drop in [labor force participation] in part to the “increased use of some social benefit programs, notably disability insurance.” ... Fourteen million Americans, including roughly 8.5 million former workers receive disability. In 2011, that included 4.6 percent of the population between the ages of 18 and 64. These Americans are not included among the “unemployed.”

Fourteen million Americans on disability–that is more than the populations of Wyoming, Vermont, North Dakota, Alaska, South Dakota, Delaware, Rhode Island, Montana, New Hampshire, Maine, Hawaii, Idaho and West Virginia, combined: every man, woman and child in 13 states. The exploding ranks of the “disabled” are due to the absence of jobs in Barack Obama’s economy. The human cost of this tragedy is incalculable.

The CEO of Express Employment Professionals, a former Chairman of the Federal Reserve Bank of Kansas City, says: “All indicators suggest this shift [out of the labor force] is not sustainable.” That’s putting it mildly.

I live in Wash. state and sent this to almost every Democrat in my district and in the House and Senate for my state.
good article, thanks (lol)

Hmmm. What caused the labor-force participation rate to be so low in the early '80s? Oh, yeah--Jimmy Carter.