Mideast: The same al-Qaida-linked Ansar al-Sharia that killed four Americans in Benghazi is now training foreign jihadists to fight with Syria's Islamist rebels. Are we about to provide them air support?

On Sept. 11, 2012, U.S. Ambassador to Libya Christopher Stevens was crouched in a safe room waiting for help as the al-Qaida terrorist group Ansar al-Sharia was taking credit for the attack, according to emails reaching the White House and the State Department. 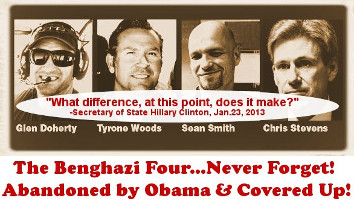 Ambassador Stevens did not survive, nor did Glen Doherty, Sean Smith and Ty Woods, all killed by the terrorists of Ansar al-Sharia and other groups whose training camps surrounded Benghazi and were ignored by an oblivious Obama administration that now calls the scandal "phony."

President Obama promised to bring the Benghazi attackers to justice, which he has not. Ansar al-Sharia roams free. Ali Ani al-Harzi, a leading suspect in the attack and a member of Ansar al-Sharia who was taken into custody after fleeing Libya for Turkey and then sent to Tunisia, is also free.

"Make no mistake," President Obama told reporters the morning after the attack, "we will work with the Libyan government to bring to justice the killers who attacked our people."

Well, not exactly. Fellow suspect Ahmed Abu Khattala was tracked down by the New York Times and found to be peacefully enjoying a strawberry frappe at a luxury Tunisian hotel.

Harzi came to the attention of U.S. intelligence investigators after he posted real-time information to a social media platform about the assault on the U.S. compound in Benghazi just as it was starting.

As Eli Lake reports in the Daily Beast, Harzi's brother is believed to be Tariq Abu Ammar, a mid-level planner for al-Qaida's franchise in Iraq. These days, Ammar's main job is arranging the travel of fighters from North Africa to Syria's al-Qaida-linked opposition.

The officials said the camps have been in operation since at least May and are part of a network that funnels foreign fighters to Syrian rebel groups. These include the al-Nusra Front, the most organized group fighting the Bashar Assad regime in Damascus. As we noted in June, Jabhat al-Nusra, with 7,000 fighters, is a branch of al-Qaida in Iraq that has publicly pledged allegiance to al-Qaida chief Ayman al-Zawahiri. It receives regular payments from al-Qaida in Iraq, and its goal is like that of a Middle Eastern caliphate.

In a revealing chart and article published by the Economist magazine, two of the three major fronts — the Syrian Islamic Front and the Syrian Liberation Front — are Islamist, as are 10 of the 12 identified rebel groups. We warned that arms destined for Syrian rebels would wind up in the hands of jihadists or al-Qaida backers.

All the ouster of Libyan leader Muammar Qaddafi seems to have accomplished is to make Libya a focal point for al-Qaida terrorist activity in North Africa. Two men believed to be Tunisians arrested on Aug. 3 carrying six passports, an AK-47 and foreign currency have provided some details of the camps.

The Tunisians stated that they were trained in small-arms use and were on their way to join Syrian rebels by traveling first to Benghazi, then Istanbul, and over land across Turkey and into northern Syria.

One of the men said he was an associate of Ansar al-Sharia's leader Sufian Ben Qumu, an al-Qaida terrorist released from the U.S. prison in Guantanamo Bay, Cuba, in 2007.

That the United States may soon be fighting alongside Ansar al-Sharia jihadists in Syria is an indictment of the Obama administration's clueless and recklessly naïve foreign policy and a slap in the face for the victims of Benghazi and their families.

HE'S NOT FOR PEACE; HE'S ON THE OTHER SIDE.

Obama's only two aims in the Middle East is to aim is to aid the Muslim Brotherhood, and to undermine Israel's security.

And we know what he has in store for America. Man, the horror of this malignant clown in the highest office... and the horror of the corruption of our news media in continually lying for him... and the GOP leadership capitulating... It's enough to make a person starve the GOP to death and lavishly fund the Tea Party to take its place.

The leviathan reads my comment here as I type it,
but can't determine what it's intelligence on poison gas use in Syria indicates who is responsible for killing thousands.

Funny that right there.

Wonder what red line narrative the chocolate emperor will contrive to take a shot across my bow?

Too bad Obama's red line doesn't extend to Christians. Over the weekend, I found 30 articles addressing recent bombings, shootings, beheadings, and rapes of Christians in Syria, Pakistan, Kenya, Egypt, and Indonesia (where Obama grew up).