The Statist's work is never done.

Senate Majority Leader Harry Reid of Nevada said Friday that Obamacare isn't the final word in government health care reform, it's just a big step toward the real solution, which is a single-payer system.

..."Reid said he thinks the country has to 'work our way past' insurance-based health care during a Friday night appearance on Vegas PBS' program Nevada Week in Review...

In other words, Democrats want to 'work our way past' the free-market system. 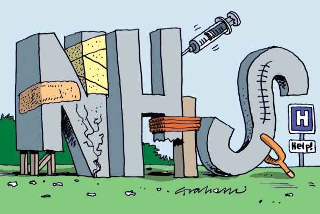 ..."When then asked by panelist Steve Sebelius whether he meant ultimately the country would have to have a health care system that abandoned insurance as the means of accessing it, Reid said: 'Yes, yes. Absolutely, yes.'

"The idea of introducing a single-payer national health care system to the United States, or even just a public option, sent lawmakers into a tizzy back in 2009, when Reid was negotiating the health care bill... [and] then-Sen. Joe Lieberman's opposition to the idea of a public option made them abandon the notion and start from scratch."

"Single-payer" is a system in which only the government provides and funds health care to citizens. Typical examples of single payer systems supported by U.S. advocates of the approach include Britain's National Health Service [NHS] and Canada's Health Canada program (which is also known there as "Medicare").

Ah, yes: Britain's NHS, authors of such classics as:

• "NHS darkest hour: 1,200 'appalling' deaths at Stafford hospital but NO ONE blamed"

• ...the scheme requires complete government control of the national healthcare system. In this way, the government can control prices, costs, medical treatments, standards, and so forth. This is necessary because healthcare consumes a huge portion of government resources.

• ...socialized medicine is about providing equal care to every citizen. This is the basic pretext for instituting socialized medicine – to extend healthcare to those who do not already have it or cannot afford it. However, instead of merely providing taxpayer subsidized care to the have-nots, the promoters of Big Government seize the “crisis” opportunity to take control over everyone’s healthcare... schemes like ObamaCare and the NHS seek to ensure only that no one gets better care than anyone else.

• ...socialized healthcare is about rationing... The need for rationing is quite obvious... [as central planners try to control supply and demand]

We are watching the Statists dismantle the greatest health care system on Earth in pursuit of a Utopian fantasy. And the feckless "opposition party" won't even fight.

This is a disaster and we have so called Republicans that cower.

Did you really just refer to our pre-Obamacare system as "free market"?

@anon 8:58 - there are two ends of a spectrum. to the left is government-controlled, single-payer. to the right is the free market.

the u.s. hasn't had a true free market system since the days of FDR. And each year, the system gets closer and closer to single-payer.

any movement at all towards the free-market system is the reference i was making.