Andrew Cuomo is truly a diabolical character. Few know that his fingerprints are all over the 2008 financial crisis. As the Secretary of Housing and Urban Development under Bill Clinton, Cuomo forced banks -- yes, forced banks -- to dispense with their longstanding mortgage underwriting practices and begin issuing no-documentation-required home loans. In the interest of fairness, of course.

We all know how that particular Cuomo brainstorm worked out.

Now Wynton Hall reports that New York's governor is involved with another peculiar case of financial skulduggery, one I'm sure he'll chalk up to "coincidence". 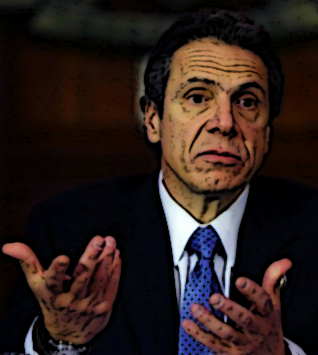 The company, Extell Development, made two $50,000 contributions to Cuomo through two of its corporations. Three weeks after Cuomo signed the bill granting Extell and four others the generous tax breaks, Extell President Gary Barnett stroked another $100,000 check to a state Democratic Party account that the NY Daily News says is to be used to push Cuomo’s policies.

Neither Extell or its president had previously donated to Cuomo... “To suggest any connection,” says Cuomo aide Melissa DeRosa, “is an irresponsible distortion of the facts.”

A special New York state corruption commission has subpoenaed Extell and the other companies who received the lucrative tax breaks.

Had Cuomo been serving in the private sector and pulled off some of these hijinx, it's likely he'd be serving a 30-year stint in Attica.

Ugh, Doug. You photoshopped Cuomo to make him look like he has AIDS. Or maybe he's a zombie. How will he be able to hang onto his bottle blonde girlfriend and private chef now?