The Difference Between Orlando and Chicago: The Right to Preserve Your Most Precious Gift

Try to imagine what would have happened had this precise scenario unfolded in Chicago (or any other Democrat-enforced human hunting preserve).

An armed robbery suspect was shot and killed in West Melbourne, according to the Brevard County Sheriff’s Office. 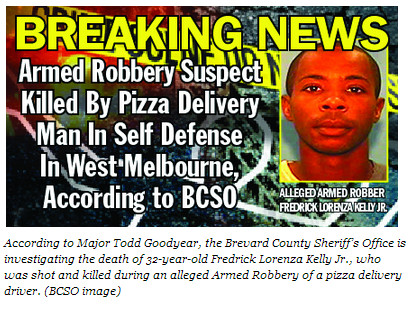 According to Major Todd Goodyear, the Brevard County Sheriff’s Office is investigating the death of 32-year-old Fredrick Lorenza Kelly Jr., who was shot and killed during an alleged Armed Robbery of a pizza delivery driver.

According to Goodyear, the incident occurred in the parking lot of the Days Inn motel at 4500 West New Haven Ave., West Melbourne, an area that fall in county jurisdiction shortly before midnight on August 23, 2013.

Bryon Park, 54, of Palm Bay had just returned to his vehicle after delivering a pizza to a room in the motel complex, when he was approached by Kelly brandishing a large knife.

According to Goodyear, Kelly demanded money from Park and threatened to kill him if he did not comply. Park obtained the firearm he carries in his vehicle and defended himself, by firing once toward Kelly, who was struck and pronounced dead at the scene. Kelly’s body was transported to the Brevard County Medical Examiner’s Office for autopsy.

In fact, almost exactly this same scenario did occur in Chicago just a few short years ago.

A man pleaded guilty Thursday in the 2006 slaying and armed robbery of a widowed mother of four sons that occurred while she was delivering pizzas near West Chicago.

Bradley Justice, 31, of Sandwich was scheduled to go on trial next week in the brutal killing of Karen Hassan, 41, of St. Charles. Hassan was beaten to death with a hammer as she arrived at a unoccupied industrial site to deliver pizzas ordered by Justice, who later used cash he took from the woman to buy cocaine.

Thanks to the radical left Democrat Party, Karen Hassan had no ability to defend herself against a vicious hoodlum and criminal.

Democrats want law-abiding citizens disarmed. They use the blood of children to push their radical gun control agenda. They want the citizenry cowed and fearful.

And that is why cities like Chicago are awash in blood; for it is the citizens that obey the Democrats' unconstitutional laws leaving only gangsters with deadly force.

This is why I arm myself, in my home. You cannot get a right to carry permit in the Peoples Republic of Maryland, as they have no regard for the second amendment.

I need not say that Maryland has been ruled by leftist Democrats for over 50 years, and the huge numbers of government workers that feed from the trough keep it that way.

I live on the Eastern Shore side of Maryland, were people still abide by the law, own guns, and live by American values, not leftist values, which is an oxymoron in itself.

To all you career criminals, who were brought up by single parent families on the dole, try your Bs here, and see how fast you die.

Where are the progs moonbats screeching about Stand Your Ground?