Female Member of Israeli Parliament Obliterates John Kerry: You will "cause the whole region to spin out of control"

Now, this is speaking truth to power:

In letter publicized to the press, Shaked attacks US pressure to release terrorists: "You are putting me and my children's lives at risk" 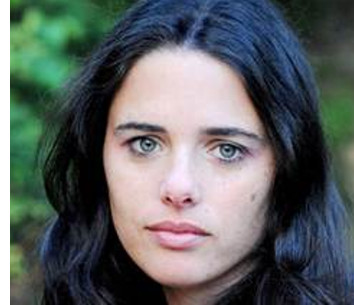 "In light of the current situation that you have brought about, I feel that I cannot be bound by the restraints of 'politically correct' wording, and I therefore will allow myself to convey my following message to you in the most straightforward fashion... By forcing Israel to capitulate to terrorism by releasing murdering terrorists with so much blood on their hands that the US would never dream of releasing if it was their own citizens murdered – you are not only being extremely hypocritical, but are actually dabbling in experimentation and gambling, by putting me and my children's lives at risk..."

..."Mr. Secretary: the price of releasing over a hundred convicted murderers will be borne by my family and my people, not by you." she continued, asking "How will you carry the burden of the terrible price toward which you are leading us?"

"You forced us into peace talks during a period of time that the entire Middle East is in chaos, without realizing that by doing so, you have foolishly put us in an impossible situation in which we cannot and will not make any concessions."

By "raising expectations to a dangerous level" in this way, Kerry is threatening "to cause the whole region to spin out of control," she claimed... Shaked ended the letter with a word of "advice" for the US Secretary of State.

"The past four years in Israel have been as quiet and peaceful as ever. Therefore I suggest you perform your job in a much more effective and relevant fashion by focusing your attention on Syria and Egypt, where people are actually being slaughtered."

Which reminds me: Hillary Clinton is the greatest Secretary of State ever.

Why is it that women in positions get it? except for bilary, thatcher, mrs Gandhi, the indian woman who was assassinated after her husband, Australia's prime minister, the cabinet member in Ireland, and this young brave woman?

And why cant our idiot republican politicians speak clearly and openly like this to the insane demonic fools who are playing games with peoples lives?

Some of us tried to warn the senate about the narcissism, arrogance, incompetence, and ineptitude of one Scary Kerry, but the members wouldn't listen.

America will pay for such stupidity.

I do so agree with her!

Useless peace talks with a high price tag while Egypt burns. Wherever the fire is, Obama is pointing the extinguisher in a completely opposite direction. It baffles the mind.

Three more years of this!!!

It's not mind-boggling at all, Ms. Noble.

If you start with the assumption that Obama, his regime, and the puppetmaster George Soros intend to engage in Gramscian cultural Bolshevism, then it becomes easily predictable that they will engage in conduct that destroys the US economy, destroys Western society and culture, damages our allies, and emboldens our enemies.

Ever read John Stormer's book "None Dare Call it Treason?" He predicted all of this almost fifty years ago.

This criminal administration has an agenda , the body count racked up along the way to their goal means nothing to them. Anon 1:17 AM nailed it right on the money , that's exactly what's going on here. The cowardly / self serving U.S. Congress and the " owned mainstream media whores " are complicit in the deliberate/calculated murder of all who stand in their way .

They should be "released" with a bullet to the brain - simple, expedient, everyone wins...

Of course, the liberal pansies will scream, but they will scream anyway, so we can write them off as worthless...

That pretty much sums up the present US Administration - useless pansies...

Kill the bastard terrorists - that is the only want to be sure innocent people are safe.