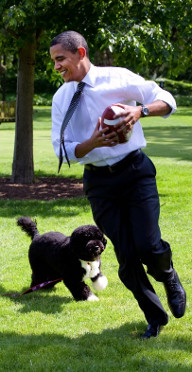 A Scandal Bigger than Benghazi: Arnold Ahlert
BBC: Obama to weaken criminal code to make it easier for crooks: TAB
Obama’s Maya Shankar, A 20-Something That Thinks She Knows How to Run Your Life: Publius

Will Lorance verdict have a “chilling” effect in combat?: This Ain't Hell
Obama Fights for Homosexual Freedom but Not When it Comes to Islam: Outcast
NSA Increasing Security by Firing 90% of Its Sysadmins: Bruce Schneier

QOTD: "The pension benefits that unions have negotiated are now killing the jobs of their fellow union members. As in Washington, D.C., the entitlement excesses of liberalism are jeopardizing current liberal priorities.

Many people have been predicting this crack-up for years, the inevitable result of a political alliance in which unions elect Democrats who pad benefits for unions, which then spend to re-elect Democrats, who repeat the cycle. The music stops only when the taxpayers are tapped out or the city and state can't borrow any more." --Wall Street Journal

at 6:27 AM
Email ThisBlogThis!Share to TwitterShare to FacebookShare to Pinterest
Labels: Linkfest

Wow, $70 Trillion sure sounds like a pretty large number for unfunded liability - why hasn't the United States declared bankruptcy decades ago?

Perhaps because unfunded liability doesn't mean current liability: I don't think all of that $70 Trillion in debt will be called in simultaneously, right? We only need to be sure that the liability due, say, in the next year or two be paid off. Otherwise, the entire country would be in the same trouble as the US Post Office, which has to completely fund their pension liability for the next 20 years right now - which seems odd to me as the Union worker who is 35 years old today is not going to retire for 20 years, yet his pension is already fully funded.

If some accountant, business major, or lawmaker would like to straighten me out on this, feel free. I'm still trying to understand why some people panic when spending trends are extrapolated 50-75 years into the future when most businesses, and government, can't stick to a 2-year budget plan. ;-)