In his typical savvy fashion, House Speaker John Boehner has reportedly unveiled a secret, two-fold plan for demoralizing the Republican base, thereby reverting all three branches of government to Democrat control.

1 Even though 80 House Republican have signed a letter urging Boehner to defund Obamacare, Boehner refuses to use the power of the purse to kill the most unpopular law since prohibition.

Boehner told the House Republican membership in a [confidential] telephone meeting a short while ago that the Republican leadership will NOT pursue defunding Obamacare, that they will only pursue saving from the sequestration

Mark Levin suggests calling the Unaffordable Care Act "BoehnerCare". I don't think that's fair, since Barack Obama gave birth to it. Instead, I suggest we use "O'BoehnerCare".

2 Despite an overwhelming majority of Americans who believe the border must be secured before any Amnesty or immigration reform is contemplated, John Boehner is secretly pressuring House Republicans to pass the Senate Amnesty bill, even though he publicly claims he's against it. 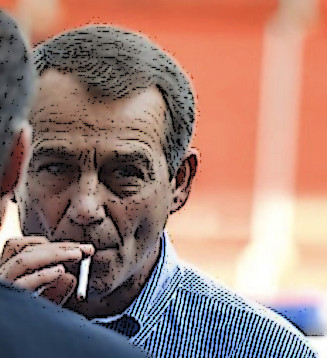 Senior GOP aides of a super PAC linked to Speaker John Boehner are lobbying House Republicans to pass the Senate “Gang of Eight” immigration bill, legislation that Boehner has said he will not bring to the House floor.

The lobbying effort is coming under the umbrella of the American Action Network, a nonprofit 501(c)(4) “action tank” led by former senator Norm Coleman, which is touting the “major positive economic impact” of the Senate bill in e-mails sent to individual House Republican offices.

AAN is housed in the same office as the Congressional Leadership Fund, a super PAC associated with Boehner, and the two organizations share senior aides, including Brian O. Walsh, the president of both organizations, and Dan Conston, the spokesman for both... Boehner spoke at a fundraiser for CLN earlier this summer and also headlined the organization’s inaugural event. The group’s website has posted links to numerous news stories that refer to the group as “Boehner’s” super PAC.

Let me put this in words simple enough for even Boehner to understand: you pass this job-destroying Amnesty bill, you will have sealed the fate of the GOP for decades.

You will lose your Speakership -- guaranteed -- and you will then return to the back-bench of the House, having been booted back to minority status. Then you will watch Nancy Pelosi -- or whatever Marxist the Democrats elect -- take the gavel from your nicotine-stained fingers while you cry like a baby that needs a diaper change.

So much for the people who thought if we lost that this would teach us a lesson. The only lesson is that losing will be forever.

There must be an extraordinary amount of money shuffling going on. The amount of corruption is mind numbing. How else do we explain the Republicans who embrace ANYTHING from Obama?

You go John and fund Obama-care or national health care whatever you left wink marxists and Ronald Reagan want to call it. I love John Boehner, he is awesome, he fights for us right wing fucked up gun totin' bible thumpin' selfish idiots who use our simple minds to justify the underlying prejudice that informs our thoughts and behaviors. Does this sound familiar? God is good, God is great. Let us thank Him for our food. By His hands we all are fed, Give us Lord our Daily Bread. Except for those other people. Amen.

Give me a fucking break!

Please, please, please don't allow the Republican leadership be involved in passing anything that resembles immigration amnesty for mexicans. Let it pass with just democrats involved. Then when Texas is a democratic state in a few years the Repubs will have the former base (you) to blame.