It Would Seem That the Email Address of Sean Spicer, the so-called RNC "Communications Director", is a National Secret

There's a rumor circulating that the Republican Party has a Communications Director by the name of "Sean Spicer". 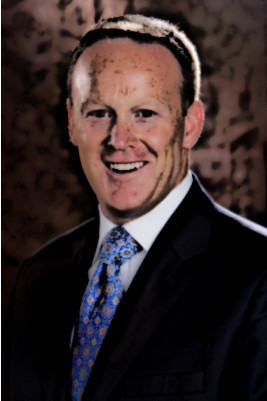 ...He urged listeners to follow him and send him feedback and ideas on twitter to him (@SeanSpicer) and Priebus (@Reince).
Spicer said he could not emphasize how even the simplest suggestion can be adopted and help make the RNC better and more receptive to the concerns that grassroots conservatives, bloggers, and activists have...

I had the idea of interviewing Mr. Spicer concerning his offer to Levin -- which the famed author, attorney and radio host has formally accepted -- but contacting the "Communications" director has proven more difficult than interviewing Jimmy Hoffa.

Nor has emailing every permutation of email address I can think of, including -- but not limited to:

All of which were returned as undeliverable.

It would seem that the Republican Party's "Communications Director" is in the Witness Protection Program.

He's harder to get a hold of than Howard Hughes.

All of which seems appropriate for a GOP that is more out of touch with its conservative base than Michael Moore with his toes.


Update: Hallelujah! I have received an email and a tweet from Mr. Spicer himself. I will keep you apprised as to our communications.

That way it will be totally ignored by the media and leftists, but will be picked up by right-side bloggers.

Anyone associated with the GOP leadership can be trusted to the extent we can trust John Boehner.

Cowardly, corrupt bums -- the lot of them.

Do you have the feeling the leadership of the GOP is sort of dysfunctional?

Well following jackass comments about msnbc, maybe you could email and ask him when he plans to call out.fox for their "disgusting and demeaning comments which devolve into personal attacks". Or simply when he might publicly call them out for dishonesty and a right-wing bias?

I have been trying to speak with anyone in the GOP for two months and nothing. I HAVE A WAY FOR TRUMP TO WIN WITHOUT QUESTION. BUT NO ONE WILL CONTACT ME.
I'M NOT AN UNEDUCATED MORON, I AM CEO OF A NEW YORK HEDGE FUND

I remember when you didn't put your flag out during the Third Reich, your neighbor called you and told you to get it out! If it ever gets to the point where we are required to fly the flag, GOD HELP US!

I also would much rather have had Timothy McVeigh burn the flag to make us aware of a problem, rather than blow up a Federal Building in Oklahoma City, killing 168 people with 4,800 pounds of explosives.

I am a 86 year old veteran of the Korean War and I love my country very much.
Remember FREEDOM IS NOT FREE.

Sean Spicer just interviewed on MSNBC is a BIG BABY. Very immature man; ;very unprofessional with reporters who are trying their best to report fairly to the American public. What are the GOP trying to hide? The more they try to talk around the issues, the more in my opinion they are implicating themselves with their lies. What a painful interview to watch when Kate simply asked him if he trusts the CIA which Trump has made clearly he doesn't. His outburst was telling.......

Sean Spicer's outburst on MSNBC is most telling about what the GOP is trying to hide. He's a very immature, unprofessional man.

Would you share that email address for Spicer? I wanted to email him, not Twitter, and can't find his email anywhere, not even on the GOP site. There's really no place for emails there at all.

I just want to tell him that he is doing a great job!