David Gregory, Organ of the State

NBC's leftist hack David Gregory, who hosts Meet the Press over the weekend, asked his ‘panel’ with a big smile on his face ‘do American voters want to see a third Obama term or would they like to see the restoration of the Bill Clinton era?’ Gregory was smiling from ear to ear that it makes it obvious what he wants. Another term of Obama, even though Obama isn’t eligible for the third term. 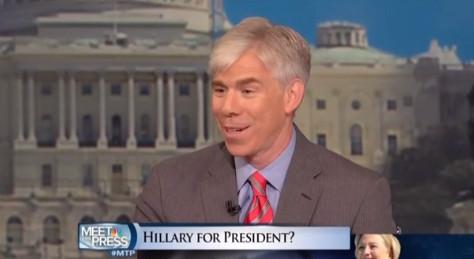 "Do Americans, specifically Democratic voters, do they want to see a third Obama term or would they like to see the restoration of the Bill Clinton era?"

What is it with this Democrat-Media Complex? Whether it's Tom Friedman pining for Red China's government, or Barack Obama's serial abrogation of the Constitution, they have a hankering for dictators.

And David Gregory -- the same jerk who should have been prosecuted for waving around an illegal 30-round magazine in the District of Columbia -- is the very worst of a very bad lot.

I fear he won't leave when this term is over. He breaks the law all the time and no one does anything.