This is Not the War We've Been Waiting For


Remember "the mother of all battles?" It's easy to dismiss the primitive war cries coming from Iran, Hezbollah and Syria as the same schoolyard hyperbole we get every time the USA and the West take aim at the Islamic world. We've become inured to the empty threats, but listen up. This time will be different.

It won't be 1991 when Bush The Elder successfully blocked the Israelis from responding to Saddam's hapless Scud missiles. Today's Israel - even one led by Obama's cat's-paw, Benjamin Netanyahu – is in no mood for that. If the Islamics insist on hitting Israel with reprisal attacks, Israel will likely respond with disproportional force, and a furious multi-front exchange of unknown duration would ensue.

We certainly don't hear that grim possibility reported or "analyzed" by the Obama-controlled media. But folks, look around the room. That's the war we should all be worried about. 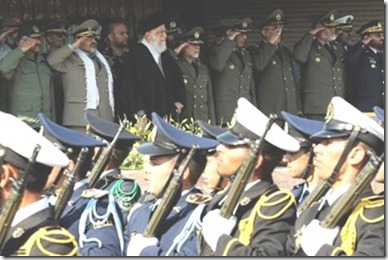 “Israel will be hit by retaliatory attacks if the United States launches an offensive on Syria since it [the Jewish state] is the first instigator in attacking [Syria],” Iranian Army Chief of Staff Maj. Gen. Hassan Firouzabadi said.

Iran staunchly backs the regime in Damascus and is Hezbollah’s leading supporter in the region.

Firouzabadi accused Israel of spearheading efforts to drag Washington into a war with the government in Damascus.

The U.S. has stepped up its war rhetoric against Damascus after accusing President Bashar Assad’s regime of using chemical weapons earlier this month against opposition strongholds outside Damascus.


Editor's note: I've placed an All Points Bulletin for the oft-used term of yesteryear: chickenhawk:

There were several "red lines" on the walls of the Benghazi compound, ain't that right Rep. Chickenhawk, @NancyPelosi?

Ah well, it IS about time for the Apocalypse of Revelation. If we're gonna get on with it, we cannot alter the schedule.

The accusation against Israel is a given and, barry must be smiling between his dumbo ears because, he hates Israelis/Jews as much is Iran.
Naturally, I ask myself this question - is that his goal indirectly attempting to 'wipe Israel off the map'?
I put nothing beyond him and, his comraderie gang.

I have never seen such a foul man, a pathological malignant narcissist to boot!