HOLY SHNIKEYS: ESPN Contributes $6 to the Average Cable Bill, Whether You Watch it or Not

In an era of consumer choice and pricing transparency, cable companies and telcos offer neither. You want to pick your own channels? F*** you. You want to create your own bundles of services? F*** you.

The cable companies and telcos are the last vestiges of Ma Bell, the government-sponsored monopoly; and they are clinging to their monopolistic power by their fingernails. They take massive amounts of cash and slather it over K Street like butter on Michael Moore's waffles. Which is why they routinely receive the worst customer service ratings imaginable.

TV programming is a main driver of cost in your cable bill—and the price for both is going up. 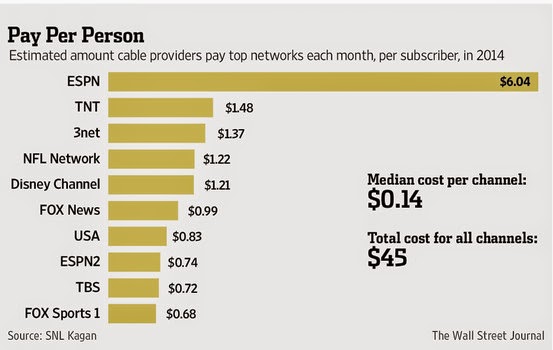 ...Cable and satellite providers such as Comcast, Time Warner Cable or DirecTV pay networks like ESPN and TNT a certain amount per customer for programming each month.

The wholesale cost per network is expected to increase 36% by 2018 according to media-research firm SNL Kagan estimates. Cable providers currently pay a total of $28.32 for a few dozen channels, depending on the provider and the cable package, with ESPN taking over $6 of that. Meanwhile median price paid for each channel a subscriber gets is 14 cents. ESPN is estimated to cost $8.37 per month in 2018, an increase of 39%... Despite the rise in programming costs, which cut into its cable TV margins, cable companies continue to generate healthy profits by bundling TV with phone and broadband, a high-margin product. Cable companies also add in ancillary fees on bills like equipment charges.

Interestingly enough, this issue relates directly to net neutrality. Net neutrality isn't a conservative or progressive issue: it's a liberty issue. Should a few monopolies control your access to content or not? Net neutrality says they shouldn't be able to discriminate, period.

If we had actual competition in Internet or cable access, net neutrality's opponents would have a point. But the corporatist oligarchy -- a handful of cable- and telco companies -- spends enormous amounts of money and influence assiduously avoiding competition.

In 2006, Daniel Berninger wrote one of the best summaries of net neutrality I've read:

Beware of the monopolist that wants the “market” to decide. If there actually existed a healthy market for Internet access, users would certainly switch away from service providers tinkering with performance based on kickbacks from content companies. The toll collecting ambitions of the telco’s and cable co’s hinge on the absence of market forces. The fights against municipal wireless initiatives and lobbying budgets that exceed R&D budgets arise to defeat any leakage of market power. Network neutrality forces a virtuous cycle where winning requires making offers faster and cheaper. This dynamic accounts for growth in the info tech industry as platform improvements expand the range of possible applications.

If the oligarchs had their way, the Internet would be offered like cable TV. Something like this: 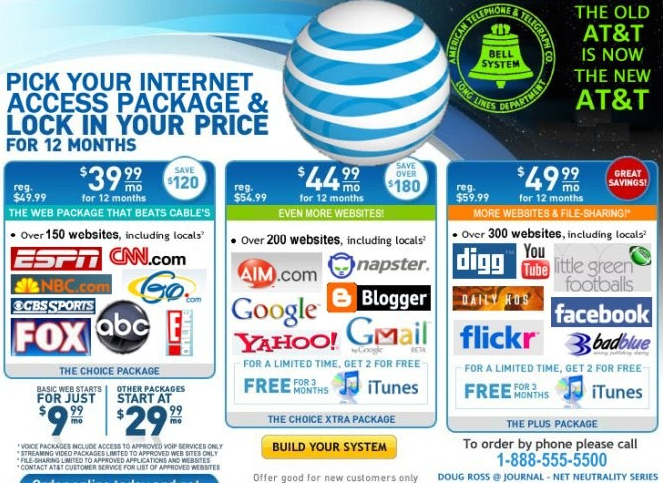 It's some good learnin', if I do say so myself.

Another way of looking at is is that the current legal and business environment for cable and satellite services mean that when you subscribe because you like a few channels, that part of your monthly payment also goes to pay for channels that you don't like, and that in fact may insult your values and work to degrade the country, such as CNN or MSNBC.

It also means that for channels like MSNBC, ratings don't entirely control their revenues. Would MSNBC be able to stay in business should conservative customers be able to stop subsidizing it?

I ditched my satellite TV got a Roku box. Having on-demand TV allows me to not be stuck to the clock. We watch what we want, when we want. We don't get sucked into watching programs we didn't plan on watching. We don't waste near as much time as we used to. The TV is turned off a lot more than it used to be.

Interestingly, the price-distortion and knowledge-distortion aspects of "bundling" are also on display in a Minnesota cafe affected by the state's increase in the minimum wage. The more the statists try to deny reality, the harder it bites them in the ass.

The current proposal to "regulate broadband as a common-carrier utility" (PC World) is insane.

You want old-time princess phone ATT back, regulate broadband as a utility.

Dropped cable/satellite about 4 years ago and pay 8 bucks a month for Netflix and don't miss a thing !!!