First Amendment: Government's assault on religious liberty has hit a new low as the IRS settles with atheists by promising to monitor sermons for mentions of the right to life and traditional marriage. 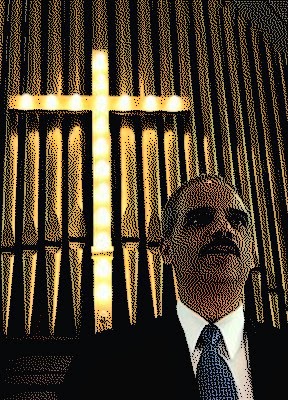 A lawsuit filed by the Wisconsin-based Freedom From Religion Foundation (FFRF) asserted that the Internal Revenue Service ignored complaints about churches' violating their tax-exempt status by routinely promoting political issues, legislation and candidates from the pulpit.

The FFRF has temporarily withdrawn its suit in return for the IRS's agreement to monitor sermons and homilies for proscribed speech that the foundation believes includes things like condemnation of gay marriage and criticism of ObamaCare for its contraceptive mandate.

The irony of this agreement is that it's being enforced by the same Tax Exempt and Government Entities Division of the IRS that was once headed by Lois "Fifth Amendment" Lerner and that openly targeted Tea Party and other conservative groups.

Among the questions that the IRS asked of those targeted groups was the content of their prayers.

Those who objected to the monitoring of what is said and done in mosques for signs of terrorist activity have no problem with this one, though monitoring what's said in houses of worship is a clear violation of the First Amendment. Can you say "chilling effect"?

Congress can make no laws prohibiting the free exercise of religion. So it's not clear where the IRS gets off doing just that by spying on religious leaders lest they comment on issues and activities by government that are contrary to or impose on their religious consciences. Our country was founded by people fleeing this kind of government-monitored and mandated theology last practiced in the Soviet Union.

The FFRF cites as its authority the 1954 Johnson Amendment, which states that tax-exempt groups cannot endorse candidates. A 2009 court ruling determined that the IRS must staff someone to monitor church politicking.

The FFRF claims that the IRS has not adhered to the ruling and that the settlement amounts to enforcing both the Johnson Amendment and the court ruling.

But is the Catholic Church "politicking" when it proclaims its "Fortnight for Freedom" dedicated to opposing ObamaCare's contraceptive mandate and the government's forcing schools and charities it considers an extension of its faith to include it in insurance coverage or face crippling fines?

Are Protestant and evangelical churches "politicking" when they participate in "Pulpit Freedom Sunday" this year on Oct. 5 to encourage congregations to "vote their faith," which they consider to be an exercise of free speech and freedom of religion?

The FFRF says that such events at "rogue churches" have "become an annual occasion for churches to violate the law with impunity." But doesn't the Constitution say that Congress can make no such laws?

Rather than "rogue churches," it's the rogue IRS that needs to be stopped.

Settle litigation against a government agency by having the agency agreeing to do something the agency wanted to do all along but would not dare propose to do on its own through the regular rulemaking process?

Sounds like exactly how the EPA "settles" litigation with enviro activist groups. The only thing different between the corrupt racket the EPA runs with the enviros is that the IRS (so far) has not said how much in legal fees it will also pay as part of the "settlement".

This is a corrupt end run around the law and must be smacked down somehow. The best smackdown that I can think of is to somehow address this in the upcoming Article V convention of the States to consider amendments to the Constitution.

If the IRS does not "investigate" the Mosques and Black Churches, all the other churches can sue due to discrimination. However, in any event, they should sue based solely on the violation of our First Amendment.

I'm more outraged that they're ignoring the NAACP and other tax-free Dem-front=groups.