Barack Obama, speaking at a prayer breakfast Thursday morning, equated ISIS with Christians of 1000 years ago. 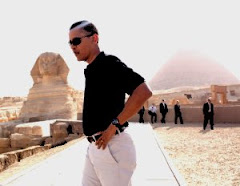 Sounding like an impassioned Black Liberationist preacher, Barack Obama made it clear today that he feels the same way about Christians as he does about Jews and America itself.

No one needs to be told normal Muslims cannot be blamed for the maniacs destroying the Middle East, Far East, Asia and Africa. What he doesn’t understand is these maniacs are not radical Christians or radical Jews or radical Hindus. They are radical Islamists and it’s the year 2015 not 1291.

There is no use delving into the obvious. Listen to his obnoxious rant for yourself. It’s very revealing of who he is and what he believes:

We are held in the tentacles of a far-left, delusional narcissist who believes that the U.S. must become a welfare state and must have only a minimal role to play in the world’s affairs.

Barack Obama wants us to get off our high horse but he’s been on his high horse since we’ve known him. He’s projecting his own failings onto the rest of us.

ISIS is beheading, crucifying and burying little children alive. They burned a young pilot alive. Many have been beheaded by ISIS after they were tortured and then the videos of their beheadings were put on line by these madmen. They abduct, murder and rape.

So who does Obama immediately think of when he wants to make a comparison? Christians of course.

He is also ignoring the rest of radical Islam. It’s not only ISIS. Al Qaeda is horrible. Boko Haram is horrible. The thousands of other jihadist groups trying to outdo each other are horrible.

Until we have a leader who can identify the problem, we will make no progress in defeating the enemy.

On Wednesday afternoon, one day after Muslim terrorists set the Jordanian pilot on fire and burned him alive, President Obama held a secret, closed-door meeting with high-ranking American Muslims at the White House. The press was barred. You see, he believes Muslims are always the victims.

“Our chickens are coming home to roost” and Barack Obama, an adherent of Rev. Wright ideology, will see to that.

Barack Obama is a revolutionary who hates traditional America and the Christians who founded it.