The proprietor of Right Wing News and Linkiest is a man named John Hawkins. Hawkins is famous for his catchy headlines, which often come in the form of lists. Like "The 25 Best Quotes From Thomas Sowell". Or "15 Questions The Mainstream Media Would Ask Barack Obama If He Were A Republican."

In that vein, I present the 7 reasons that you (and I) will never be as cool as John Hawkins: 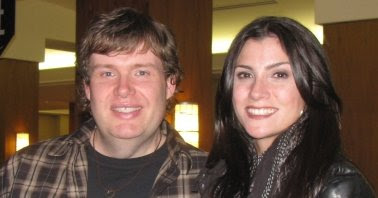 • John Hawkins will walk up to any woman or group of women -- including the stunning Dana Loesch and Katie Pavlich -- and begin chatting them up for photos. I have a vision of Hawkins' foyer that is lined with hundreds of photos of him hugging every woman on the center-right scene.

• John Hawkins knows everyone. He is an uber-networker and can connect you with the full spectrum of conservative thought, from National Review to Breitbart.com.

• John Hawkins is a prolific reader and he takes copious notes. His collections -- like "The 50 Best Ann Coulter Quotes Of All-Time" -- are outstanding.

• John Hawkins is an entrepreneur. He's leveraged his websites as launching points for a writing career, with his columns appearing at Townhall and PJ Media. I wouldn't be shocked to discover that he has a book and syndicated column in the works.

• John Hawkins is funny. At #BlogConCLT, he had me literally crying and gasping for breath as he outlined various possible "list columns" like "The Top 12 Places You Should Never Wear a Speedo With an Afro-Wig Under It."

• John Hawkins publishes some of the best columns in the business at RightWingNews, with content from Michelle Malkin, Jonah Goldberg, Thomas Sowell, Walter Williams, John Stossel, and many, many more.

• John Hawkins has one of the best collections of entertaining links -- not just politics -- at Linkiest.com. As an aside, Hawkins observed which headlines got the most clicks at Linkiest and tuned his own headline-writing skills there.

So don't bother trying to be John Hawkins. You can't possibly succeed. It's his world -- and we're just living in it.

Yeah, but can he do this?

You're no slouch, though, Doug. You just can't be so shy about approaching the hotties!!

I'm with D.D. Larwyn's Linx is my first stop each morning,and again after dinner!

I agree, Doug. John is great. I've been reading his site for years, back when he used to post pictures of his dog.

He helps out the little guys, like me. For the matter, you hook us up too!