You Lying Sack of Schumer

If there's a more malevolent, anti-American force in the U.S. Senate than Chuck "Schmucky" Schumer, I have yet to read of him or her. I firmly believe that had Schumer been around during the founding of the United States, he would have been a Tory, collaborating with the Crown.

Sen. Chuck Schumer (D-N.Y.), convening his Subcommittee on Immigration, Refugees and Border Security, vowed to have a legislative response of his own should the justices uphold the state law that allows police to require proof of residency with probable cause... “It is simply too damaging to our economy and too dangerous to our democracy to have 50 different states be permitted to take their own direction when it comes to immigration policy,” Schumer said. “The Supreme Court should find the Arizona law unconstitutional, but if it doesn’t, Congress will be ready.”

“Our founding fathers gave Congress plenary power over immigration law,” Schumer said. “The Supreme Court has consistently interpreted the naturalization language in Article I to mean that the establishment of the immigration laws and the manner of their execution are committed solely to the federal government.”

...[Former Arizona legislator] Pearce countered that “illegal is a crime, not a race,” and that the majority of illegal immigrants just happen to come across the southern border... “It’s simply the rule of law,” he said. “Laws without consequences are not laws at all,” and SB 1070 forbids racial profiling, he added.

Plenary power, eh? Which means all of those Democrat-run "sanctuary cities" and "sanctuary states" will be punished for violating federal immigration law? Of course not, because Schmucky is a lawless hack who is more interested in drumming up the votes of illegals than protecting lawful citizens and legal immigrants.

But what the lawless Obama administration and Schmucky heard from the Justices must have been disturbing. 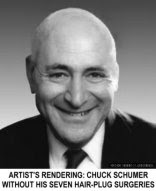 Supreme Court justices took a dim view of the Obama administration’s claim that it can stop Arizona from enforcing immigration laws, telling government lawyers during oral argument Wednesday that the state appears to want to push federal officials, not conflict with them...

...“It seems to me the federal government just doesn’t want to know who’s here illegally,” Chief Justice John G. Roberts Jr. said at one point [and] even Democratic-appointed justices were uncertain of [the Obama administration's argument].

“I’m terribly confused by your answer,” said Justice Sonia Sotomayor, who went on to say that the federal government can always decline to pick up illegal immigrants when Arizona officials call.

When the history of this Republic is written, Schmucky Schumer will go down in history as one of the most nefarious, vicious, and reckless political thugs ever to slither on the floor of the Senate.

Sotomayer - The Feds already refuse to pickup and transport illegals.

Hard to imagine a more impotent threat than "Congress will be ready."

I think Arizona should round up all their illegals and dump them in Schumer's state. Let him handle them.

Thank's a lot Chunkdog. How about if we dump Chucky in your State?

how about this: We allow the federal government to exercise power in the 4 mandates it was given through the constitution and the states and the people handle the rest, and we dismantle this wretched hive of scum and villainy that is the Federal government. If they can't do that correctly, we elect people who CAN. You keep a dangerous dog on a tight leash and the government is every bit a dangerous dog.