Obama, speaking Wednesday at Lorain County Community College in the Cleveland-area town of Elyria, touted his support for investment in job training programs that connect community colleges with unemployed workers, programs he warned the Republicans would "gut" under their budget blueprint...

...Obama's trip to Ohio -- the 20th of his presidency, according to CBS News -- was ostensibly official, and not a campaign event. But he again used the congressional Republicans as a proxy to frame the general election case against Romney. [Ed.: and again stuck taxpayers with the bill for his campaign expenses.]

..."What's the better way to make our economy stronger? Give more tax breaks to every millionaire and billionaire in the country, or make investments in education and research and healthcare and job training?" he asked. 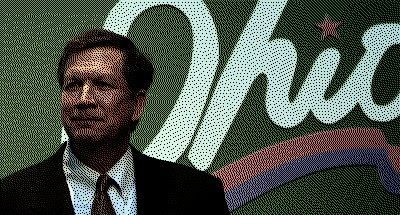 In celebrating Ohio's comeback, Obama is unintentionally repudiating his own policies. It turns out that, in spite of Obama, Ohio is 4th in the nation in job creation and tops in the Midwest. In the previous four years before Republican Gov. Kasich came into office, Ohio was 48th.

Even the states that are ahead of Ohio in job creation are far larger. Check out the other members of the top five job-creating states: Texas, New York, California and Florida. All are far more populous than Ohio. Florida, for instance, has 6.5 million more people, yet Ohio edged it out in job creation.

In fact, February's BLS data showed that Ohio created more jobs than any other state. When was the last time that happened? Can't tell, because the BLS doesn't offer data prior to the Clinton era, so it's been at least that long.

And for Obama to run to Ohio and try to take credit for its success is outrageous, but not unexpected coming from the man who claimed "If you like your health care plan, you can keep it."

Kasich has a damn good record when it comes to fiscal policies. Bill Clinton won't ever admit it in public, but the real architect of the much-ballyhooed 'Clinton Surplus' was none other than John Kasich, the Paul Ryan of Newt Gingrich's House of Representatives.

Does obama hve one ounce of integrity or is he really that shameless?

Reading your post answers my own question I guess.

Have to wonder about this one. I know he wants Ohio, but this went a bit too far!