Not Trayvon: 'I don't want to go back with him'

Although highly relevant to the Trayvon Martin tragedy, you won't read this story in old media:

Ten-year-old Abdifatah Mohamud was running for his life down Sycamore Street at about 5 p.m. Tuesday when a concerned neighbor stopped to try to help. Seeing the boy's stepfather chasing after him, the neighbor helped the man, Ali Mohamed Mohamud, catch up with the child. 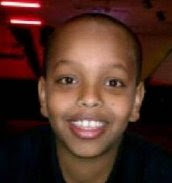 The boy didn't want to go home with Mohamud.

"I told the boy, 'Daddy promises nothing is going to happen,'" the neighbor later told The Buffalo News. "The boy said to me: 'No, he always says that.'"

Less than six hours later, Abdifatah was dead, brutally beaten, and his stepfather, Ali Mohamed Mohamud, was under arrest.

The boy was tied to a chair with duct tape, a sock stuffed in his mouth, and he was beaten with a stick or blunt object in the basement of their Guilford Street home, near the Broadway Market, authorities said... The stepfather was angry because the boy, a fifth-grader at the International Preparatory School on Clinton Street, had fallen behind in his homework...

...Mohamud, 40, a native of Somalia who has been in the United States for a decade, was charged with second-degree murder. Police investigators were shocked over the viciousness of the beating... "The defendant admitted he tied up his 10-year-old stepson, admitted that he put a sock in his mouth, put duct tape over the mouth and beat him to death with a stick or similar blunt object," Finnerty said.

And this story is simply too heartbreaking to use the all-too-suitable "Boy who could have been Obama's son..."

Pity the professional race-baiting scam artists -- Al Sharpton and Jesse Jackson foremost among them -- won't be seen within 250 miles of this case.

Well, it's black-on-black violence, and apparently quite acceptable within their sense of community.

How else to explain the silence?

It is too sad.

Joan of Argghh! Oh,so you know for a fact it's acceptable in their community.. You lack common sense. You are seriously one f-ing idiot?!!!!! Why don't you go to their community and say that to their faces... I bet after your ass whipping you'd think twice before getting another foot shoved up your behind....LMAO How else to explain the silence?