Here's a comforting word for this kook, who's protesting Israel for... allowing Arabs to vote and serve in Parliament, I guess.

Hey, tool: if you'd tried this little "protest" in Egypt, Iran, Libya, or Syria, odds are you'd have been double-tapped on the spot.

An officer in the IDF had a belly full of taunts from a bunch of pro-Palestinian activists and gave one guy a taste of his rifle magazine.

Naturally the commies are crying brutality and the Israeli government is falling for the propaganda by calling the incident disturbing and starting an investigation... 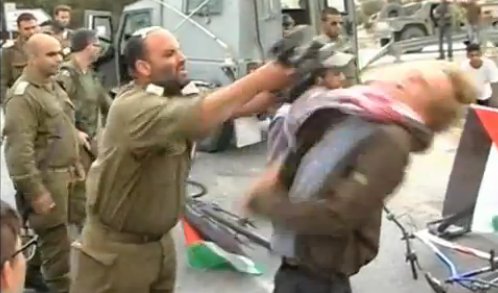 One thing to note in this video. As soon as the commie gets knocked on his ass and the troops advance on the protestors the crowd quickly melts away in fear. Maybe there’s a lesson to be learned here at home when the Occupy rabble tries to bully the police.

I love how these useful idiots always protest where they can't get in any real trouble.

I'm not sure which of the following I should say:

I guess I'm glad the guy walked away, relatively unscathed, about 10 seconds after the hit, as the video shows.

Heluva way to treat a firearm though.... blood is mighty corrosive.