Wasn't there a recurring character on SNL a few years ago that would always try to one-up everyone else's stories?

That's who Michelle Obama reminds me of. 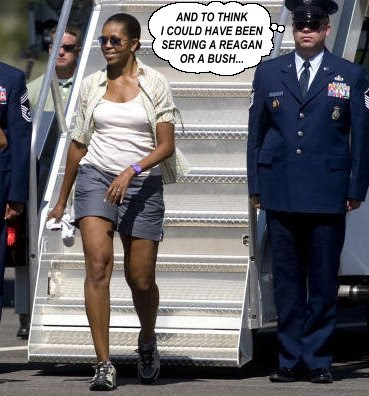 First Lady Michelle Obama recalled her father's battle with multiple sclerosis (MS) as she explained "what's at stake" in this election between President Obama and Mitt Romney -- whose wife has MS.

Mrs. Obama recalled her father's MS during a campaign fundraiser, saying he "had MS, was a blue-collar city worker all his life . . . [and her parents] saved for us, they sacrificed everything for us, why? Because they wanted something more for me and my brother." The First Lady summarized the anecdote by saying "that's what's at stake" -- by which she referred to the idea that "if you work hard, you can build a decent life for yourself and an even better life for your kids . . . So believe me, your President knows what it means whan a family struggles," she added after talking about his life raised by a single mom.

The implication seemed to be that the president better understands the trials of people with MS, and of working class people like Mrs. Obama's father. But the First Lady might have forgotten that Ann Romney, Mitt Romney's wife, also has MS....

Laura Bush had more class in her toenail clippings than this claque of unreconstructed Chicago pols. And I include the president's handlers, Valerie Jarrett and David "Red Diaper Baby" Axelrod, in that crew.

Anonymous said...
This comment has been removed by a blog administrator.
6:27 AM

These comments by Mrs. Obama wasn't about the elite Romney's. Talk about no class, your ending comments are typical.... mean nasty greedy and you just call names and don't back up any comments, because you can't... they are just code words. Throwing mud and hoping it sticks...

I have just been diagnosed with MS and I was offended by her saying that her father had MS, yet never complained. It came off Arrogant and as if people like, Mrs. Romney or myself, have no right to acknowledge the problems associated with having this terrible disease. How dare us complain of pain or speech difficulties or balancing issues...Michelle Obama's dad supposedly didn't!