If you thought paying your taxes was painful this year, get ready for more heartache next year, when taxpayers could be on the hook for almost $500 billion in higher taxes... That's the size of "Taxmageddon."

Taxmageddon is the tax hike set to slam the economy and taxpayers on Jan. 1, 2013. It's made up of seven different categories of tax cuts set to expire, and six tax hikes from the health-care law set to kick in, as soon as the ball drops on New Year's Eve.

Fortunately, you and I are exempt from the Obama tax hikes thanks to his 2008 campaign promise!

A couple of years ago, Americans for Tax Reform offered to ship taxpayers their own, valuable tax hike exemption card for a nominal contribution. Here's the way it worked: 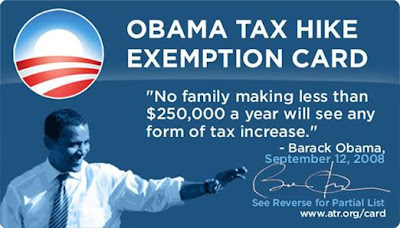 If you make under $250,000 a year and find yourself confronted with any of the taxes highlighted on the Heritage Foundation website or the ATR site ("Tax on Indoor Tanning Services," "Medicine Cabinet Tax," "Special Needs Kids Tax," etc.) simply follow these instructions:

How to use the card:

Step 1: Present the card to merchants, employers, and tax authorities like the IRS.

Step 2: If challenged, pleasantly ask: "How dare you, sir? Are you calling President Obama a liar?" “I can make a firm pledge. Under my plan, no family making less than $250,000 a year will see any form of tax increase. Not your income tax, not your payroll tax, not your capital gains taxes, not any of your taxes.”

“If your family earns less than $250,000 a year, you will not see your taxes increased a single dime. I repeat: not one single dime.”

“The statement didn’t come with caveats.”

--Obama spokesman Robert Gibbs, April 15, 2009, when asked if the pledge applies to healthcare

Which should be extremely helpful when the Bush tax cuts expire*.

* Thanks in part to the ludicrous John McCain -- of McCain-Feingold, Amnesty for Illegals, the Gang of 14, and numerous other affronts to the Constitution.

That card should be all I need next year for my 2012 IRS tax obligations on all of my income.

After all, being that obama is a "constitutional law" professor, posing as a dictator who circumnavigates the rule of law as he see's fit to advance his special interests, this is my license to follow suit. If obama claims he is a man of the people, and if he can get away with corruption, treason, and tyranny at will, it only stands to reason no laws are valid any longer for a little people like me.

If the won and every one of his corrupt double standard elite entitlement lying ass stealing thieving mooching cronies do not like it, well I have only one thing to say.

I can escalate things on that score.

I am not morally beholden, or legally obligated, to honor any law beyond what is required in the US Constitution, of me and my government, in particular any and all law created by the people who have hijacked my government, any longer.

When I say go pound sand, this is what I mean:

It is not mine to restore the power of the Constitution. It is mine to show them the wrath of American's such as me without the protections the Constitution offers them.

Let them restore it to find refuge from me.

(PS, I kind of stole that last comment from the great TL Davis.)

Obama has raised taxes even on those that aren't paying any taxes, on those not even born. It's called deficit spending - borrowing 40 cents on every dollar spent.