Obama Works His Way Down the Wikipedia Definition of Totalitarianism

Funny how liberals try to tar conservatives, Tea Partiers and others who believe in the tenets of America's founding as some sort of nascent fascists.

Because if you go down the official totalitarian checklist, it's the progressive movement that is ticking off the requisite agenda items, one by one.

Totalitarianism (or totalitarian rule) is a political system where the state recognizes no limits to its authority and strives to regulate every aspect of public and private life wherever feasible.[2] Totalitarian regimes stay in political power through an all-encompassing propaganda campaign, which is disseminated through the state-controlled mass media, a single party that is often marked by political repression, personality cultism, control over the economy, regulation and restriction of speech, mass surveillance, and widespread use of terror.

• "...where the state recognizes no limits to its authority..." - as I have copiously documented ("President Barack Obama's Complete List of Historic Firsts"), the president recognizes no Constitutional limits on his power. Just a few examples:

• In an maneuver unprecedented in American history, Obama declared the Senate in recess over a long weekend to make recess appointments that could never have passed Senatorial scrutiny.

• He became the first president to violate the War Powers Act by bombing Libya and claiming NATO was in charge, not him.

• In four years, he doubled the debt issued by the United States for all previous presidents combined, which resulted in a first-ever downgrade for America's debt.

• His administration lied to a court regarding the Gulf oil drilling moratorium and was found in contempt of court.

• When a federal judge ruled Obamacare unconstitutional and issued an ordered HHS to cease implementation of the law, his administration ignored the judge and feigned ignorance of the order.

• When Congress refused to pass the wildly unpopular "DREAM Act", which would offer a form of amnesty to illegal aliens, he ordered Immigration and Customs Enforcement (ICE) to cease deportations and issue work permits for illegals instead.

• He ordered his Justice Department to sue states for requiring valid identification to vote, despite the fact that the Supreme Court had earlier ruled such laws were valid.

• His Labor Department banned Boeing from opening its $1 billion facility in a Right-To-Work state, an unprecedented act in all of American history and a tacit payoff to the unions that have funded his campaigns.

• Oh, that's just the tip of the iceberg. You can review the complete list here. Suffice it to say that Obama recognizes no Constitutional limits on his power. And, furthermore, can you imagine what this man will do if there's no reelection hanging over his head? 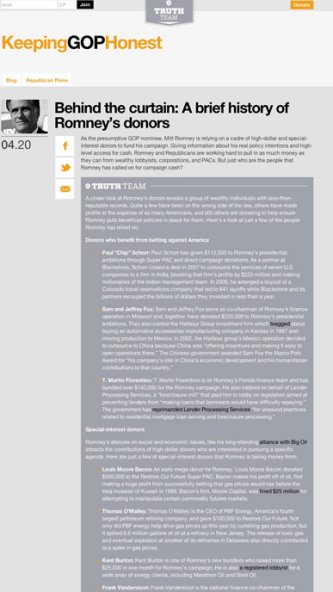 • "...strives to regulate every aspect of public and private life..." - the Obama regulatory regime controls all forms of energy production (and wants to regulate the air we exhale, carbon dioxide); the cars we drive; the size of toilet tanks we can install; the kind of light bulbs we can buy; the maximum legal water flow permitted in our shower heads; the kind of health insurance policies we can buy; how much money a bank can charge to issue a credit card; what kind of medical innovations may be introduced by private companies into the health care market; the water in your backyard (it may be a "wetland"); and the list goes on and on and on. In fact, no one knows how many millions of pages of laws and regulations we are expected to know under penalty of fines and imprisonment.

• "...stay in ... power through an all-encompassing propaganda campaign, ... disseminated through the state-controlled mass media..." - from NPR to The New York Times, mass media never attempts to vet Obama, his background, upbringing, or core beliefs. In "The Secret Scrapbook of Barry Soetero", I offer a tongue-in-cheek review of his rise to the presidency. But suffice it to say that no one in media delved into his relationship with Jeremiah Wright or Bill Ayers; how he paid for Columbia and Harvard; what his grades were; why his medical records were never disclosed; etc. Old media is state-controlled and the constant flow of reporters to politics and vice versa is proof that they are in lock-step, something never envisioned by this country's founders.

• "...often marked by political repression..." - when was the last time a presidential campaign named private citizens as "enemies" because of their political donations? For that is precisely what the Obama campaign has repeatedly done, demonizing those who dare offer support to his opponents:

[There has been] a multi-year effort by the ongoing Obama campaign to vilify specific donors to competing philosophical causes... In each of these instances, President Obama has relied on a vast grassroots network to coerce, bully, boycott and vilify individuals lawfully taking part in the political process, just as his own donors and supporters are freely allowed to engage.

...There is no current evidence the President has manipulated the federal machinery punitively. But the message remains clear, if you support a philosophical adversary, you will face some retribution. The media has so far given this White House tactic a pass... What name will elicit a defense of Constitutional freedoms? Must it be one of their own, as was the case under Nixon?

Shouldn’t every American be protected against the heavy hand of governmental intimidation? The President must explain his intimidation of people who have lawfully participated in the political system and have borne no electoral injustice to our nation other than participating in lawful industries the President finds objectionable and supporting organizations and campaigns the President opposes.

I couldn't help but notice....

• "...control over the economy..." - again, I don't think we need to review nationalizing two auto companies, crushing the private student loan industry (enjoying those interest rates, kids?), effectively nationalizing much of the banking industry through onerous and prescriptive legislation, effectively nationalizing health care through the disastrous PPACA (Obamacare), and "fixing" housing while avoiding the tough problems that include Fannie Mae and Freddie Mac, otherwise known as the job shops for connected Democrats. Need we review all of that?

• "...regulation and restriction of speech..." - they started with the "Fairness Doctrine", moved on to "community standards", and are now trying to eradicate conservatives' social media accounts -- in many cases, successfully. In short, the totalitarian left despises free speech and critics of the First Amendment include President Obama, who has repeatedly hectored the Supreme Court for honoring the Bill of Rights, as in the case of Citizens United.

• "...mass surveillance..." - they've not quite gotten there yet, but the Obama administration gave the go-ahead to the "CISPA Internet surveillance bill". Suffice it to say that we really don't know what kind of surveillance is occurring and it will, should this man be reelected, get much worse.

The final tenet of the totalitarian agenda is terrorism. The progressive-Communist Left can't quite pull that off yet, though I would remind you of Obama's multiple exhortations to create a "civilian national security force". Remember this golden oldie?

We cannot continue to rely only on our military in order to achieve the national security objectives that we've set. We've got to have a civilian national security force that's just as powerful, just as strong, just as well-funded.

You starting to get the picture, Sparky? Why they're constantly attacking the Second Amendment?

It's the last domino on the road to totalitarianism.

But don't believe me. Read the definition again and do the math.

I shudder to think what this country will become if this man gets reelected.

Hi Doug.
Here's a great one for your 'collection':

Your reliance on facts and independently documented historical events is racist!

Stick to The Great Odogma's group think or suffer his wrath.

Give me Big Government/Nanny State/Big Bother Bureaucratic Control Freak style government or give me MORE MONEY!

If you dare, add to the terrifying specter of an Obama second term one of the most frightening two-word combinations in the English language, should anything possibly happen to remove him from office:

Doug, put this in the sidebar on the "By Popular Demand" thingy. It's a great collection of hits for extra damage.

oh but they have the terrorism thing going on .

as well as EPA agents that will visit you if you dare to try to address that crucifying remark...

i meant to say 'google kimberlin"

sowwy :oops:
past my bedtime

How any citizen of the USA could not see this is beyond comprehension.

I thought that the credit downgrade was because of the recalcitrant Republicans who wouldn't agree to a small tax hike.

And yet Obamabots ignore these facts and the media spins and covers them up!

The Obama plan endgame is fighting in the streets with the 98% attacking anyone that they percieive to be the 2%.

Sounds vaguely familiar to Germany circa the 1930's!