I would follow Allen West into battle anytime, anywhere. 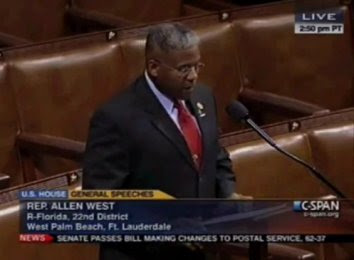 "Although he has never served our country in uniform, or risked his life to defend its freedoms and liberties on distant shores, it seems President Obama understands a thing or two about weaponry," West said on the House floor. "But in the president's case … the current weapon of choice is tax policy, and the enemies are small businesses, investors, entrepreneurs and corporations, who seemingly are deemed undesirable.

"President Obama seems determined to punish and wipe out economic success in this country, leveling tax weapons of mass destruction on all taxpayers."

"Next year, unless changes are made to the tax code, America will be bombarded with the heavy artillery of the largest tax increase in the nation's history, causing massive economic injury and destruction," West said.

West also criticized Obama's understanding of tax policy, arguing that increased taxes would do little to reduce the deficit, which he said is caused by overspending. He also said people facing higher taxes would react to these taxes, leading to less new revenue than the Obama administration anticipates.

Da-yam. I love this man.

In a completely platonic way.

Allen West restored my faith in finding real leaders for this country. He's my first choice for everything.