Breaking: New Letterhead Unveiled for the Department of Justice

In light of reports that the Department of Justice now refers reporters to Media Matters -- the George Soros-funded propaganda arm of the hard Left -- I felt it imperative to introduce brand new letterhead for the DOJ.

The Department of Justice is using the liberal “watchdog” group Media Matters for America to deflect questions about the Fast and Furious scandal, including those regarding a gun that might have been used in the murder of a U.S. Border Patrol agent.

A new book raises questions as to whether the FBI hid the existence of a weapon recovered at the scene of murdered U.S. Border Patrol agent Brian Terry. Conservative commentator and author Katie Pavlich lays out evidence she says points to a FBI cover-up to protect a confidential informant in her recently released book, Fast and Furious: Barack Obama’s Bloodiest Scandal and Its Shameless Cover-up...

Katie Dixon, a 'confidential assistant' in the Office of Public Affairs at the Department of Justice, reportedly sent an email to Washington Free Beacon writer C.J. Ciaramella saying that she had been directed to send him a link to Media Matters for America, which holds weekly "strategy calls" with the White House, in response to an inquiry  regarding the Operation Fast and Furious scandal... 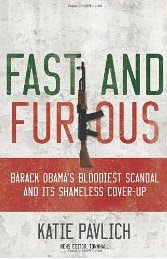 Requested comment from DOJ re: @KatiePavlich's #fastandfurious book. DOJ sent me a link to a Media Matters article...

The message then linked to a story titled Fast And Fallacious: Pavlich's Book On ATF Operation Filled With Falsehoods. At the time of this writing, Dixon has not responded to Breitbart News to confirm that she sent the email shown in the tweet.

Pavlich's book, which is currently a top seller on Amazon.com, is described as telling readers "in chilling detail, just what this operation conducted by the ATF, under the supervision of the Justice Department, entailed" and saying that "equally appalling is the blatant cover-up of wrongdoing by the Obama administration."

In other words, the Holder Department of Justice is openly collaborating with an ultra-left wing propaganda outlet to continue its long-running cover-up of Operation Fast and Furious.

I spoke with author Katie Pavlich on Saturday and she confirmed that additional disclosures related to her bestselling book -- little gems, as I like to call them -- are on the way.