Because nothing says chic like those pencil-thin models in a Nazi death camp: 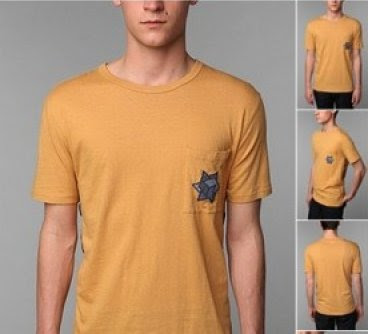 The norming of evil. As the depraved left tightens its chokehold on the culture, the media, arts, and popular culture in general reveal to us their true face -- monsters. This is how Hitler and his lovers overtook a country...... incrementally, step by step, mainstreaming hate, dehumanization and genocide via the culture. This is the MBO of the left/Islamic coalition in America. The banality of evil.

American clothing company Urban Outfitters is selling a holocaust T-shirt bearing the Jewish star that Jews were forced to wear by the Nazis in death camps. This Urban Outfitters T-shirt is labeled "Auschwitz chic" and retails for $100. The “patchwork Star of David on the left breast pocket goes back to 1930s and 40s Europe.” The “vintage yellow color” of the shirt is Nazi yellow -- obvious to students of Nazi Germany. This is just another in a long line from the antisemitic Urban Outfitters of Jew-hating clothing pieces using monstrous iconography. The latest Jew-hatred fashion follows on the heels of Arafat's war scarf (the keffiyeh) is this Auschwitz tee shirt. The store also generated anger in 2004 with a shirt bearing the words “Everybody Loves a Jewish Girl,” surrounded by dollar signs and shopping bags.

Atlas has the contact info for Urban Outfitters as well as a recounting of the company's bizarre history of hateful clothing choices.

Co-Founder of W.W., Brian SS Jensen (I’m not kidding. “SS”) issued the following statement in response to the t-shirt controversy:


as some of you are aware, several news sites have been writing about our ‘Kellog’ T-shirt, which feature an image of a six-pointed star, allegedly similar to the yellow badge jews were ordered to wear by the German nazis.

First of all the graphic is not the Star of David, and I can assure you that this is in no way a reference to judaism, nazism or the holocaust. The graphic came from working with patchwork and geometric patterns for our spring/summer collection ‘State of Mind’.

However when we received the prototype of this particular style we did recognize the resemblance, which is why we decided not to include the star patch on the final production T-shirt.

I assume the image people have reacted to comes from Urban Outfitters´ web site. This must be a photograph of an early prototype.

I am sorry if anyone was offended seeing the shirt, it was of course never our intention to hurt any feelings with this.