If you needed additional proof that our current House "leadership" -- including John Boehner and Eric Cantor -- needs to go, I refer you to Exhibit Z:

...Politico’s Maggie Haberman is reporting that the leadership-affiliated Young Guns Network has sent out mailers asking Democrats to vote for Dick Lugar (not exactly a young gun) in the Indiana Republican primary against Richard Mourdock on May 8. But that’s not all. They are stirring up Democrats by referring to Mourdock as extreme. In what way is he extreme? He wants to eliminate the Department of Education!

Do you want to know what is really extreme? The creation of the Department of Education, after surviving almost 200 years without it. Since the DOE was created, the cost of college tuition has increased over 439% adjusted for inflation! The rate of increase is almost exactly commensurate with the rate of growth of DOE subsidization. As you can see from this chart, the government-induced housing bubble pales in comparison to the government-induced Big Education bubble.

Remember that the Department of Education began operating on May 16, 1980. Imagine how extreme the inflation in education costs would have been had the extremists thwarted the creation of the DOE back in 1980? Come to think of it, what would we have done had Dick Lugar failed to vote to create the Department of Green Energy in 1977? I guess that part was left off the mailer.

This is all economics 101 for Republicans, but I guess they feel they can say anything to an audience of Democrats, as long as they serve the purpose of reelecting an 80-year old liberal. The real irony here, as Bill Kristol points out, is that Young Guns was created to “chart a new course for the center-right movement and the House majority.” Lugar is neither new, center-right, or in the House!

The Department of Education has contributed mightily to the explosion in tuition costs. Just as the government's tampering with Fannie Mae and Freddie Mac helped cause the housing crash, literally every unconstitutional endeavor in which this federal gaggle of bureaucrats has engaged has ended up in failure. Economist Richard Vedder explains:

When someone else is paying the bills, people want to buy more of the good or service in question at prevailing prices than when the customer pays the bills. This means a higher demand for higher education, and other things being equal, higher tuition costs. … Each one dollar in grant aid leads to tuition fees somewhere around 35 cents higher than would otherwise be the case. Just as third-party payments in medicine have led to escalating health care costs, so increased student financial payments have contributed to soaring tuition costs...

So getting rid of the Department of Education is not only rational, it's what I would call "a good start". 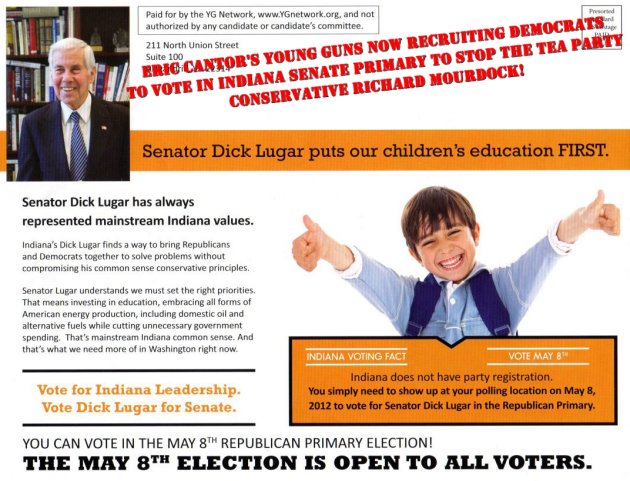 I urge you to support Richard Mourdock for U.S. Senate. It's time someone put their foot down on the GOP establishment. And that foot is us.