Change! 1 in 2 new graduates are jobless or underemployed

I'm no Charles Rove, but methinks the Obama Get Out The Vote effort will have a tad more difficulty this year than in 2008.

The college class of 2012 is in for a rude welcome to the world of work.

Young adults with bachelor's degrees are increasingly scraping by in lower-wage jobs -- waiter or waitress, bartender, retail clerk or receptionist, for example -- and that's confounding their hopes a degree would pay off despite higher tuition and mounting student loans.

An analysis of government data conducted for The Associated Press lays bare the highly uneven prospects for holders of bachelor's degrees... 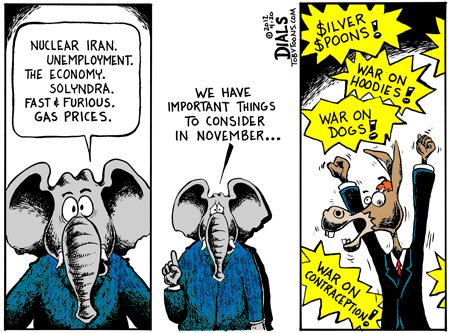 ...Taking underemployment into consideration, the job prospects for bachelor's degree holders fell last year to the lowest level in more than a decade.

...About 1.5 million, or 53.6 percent, of bachelor's degree-holders under the age of 25 last year were jobless or underemployed, the highest share in at least 11 years. In 2000, the share was at a low of 41 percent, before the dot-com bust erased job gains for college graduates in the telecommunications and IT fields.

Obama 2012
Hey, Kids! We're pretty sure more class warfare will work if you just give us another four years!

Then again, if you speak with most of the graduates you have to wonder why even McDonalds would hire them. Something about a thousand stooges not ever quite making and Einstein, and even Einstein was wrong, according to... him. Just... saying.

Hmm, I could use a car wash. Suppose any of them would work for a meal? *grins*

These are some tough times. It is incredible to imagine 1 in 2 new graduates are jobless or underemployed. These are the sign of the times. Now, many are going directly to graduate school due to the simple fact that no job are available.

China and India are eating up the jobs and the US has a major problem in its hands! Hopefully, things will change soon for our younger people.

David, Stun Gun Supplier said...
This comment has been removed by the author.
5:38 PM

Yeah, I'm in that age group and I don't see nearly as much support for Obama this time around. Or if there is support it comes off as really desperate. We know he's failed.