Ben Bernanke and the Pyramid of Doom

This morning, a vastly expansive essay by Lew Spellman of the University of Texas in Austin titled "Warren Buffett and the New Calculus of Gold" is making the rounds, and while the narrative is largely defensive of gold, and its role as the only true safe collateral in a world rapidly depleted of the latter (as we have been arguing for the past two years) as proven over and over by the fact that the entire modern system now relies more on re-re-re-rehypothection of existing collateral than on spending money for CapEx purposes and to replace an aging asset base, we wonder: is this realization really just now being grasped by the world?

Are the forward thinkers of the world only now understanding that in a world with hundreds of trillions of imaginary collateral whose ultimate owner will never be tracked down, and a daisy-chained bankrupt domino collapse will come before anyone finds out who owns what? 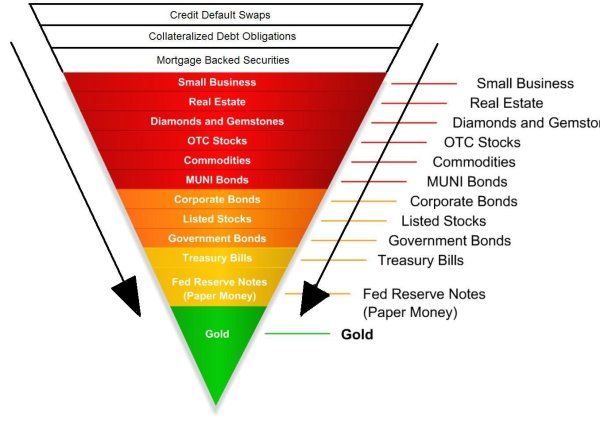 ...Because one can spend 30 minutes reading the Spellman essay, or... cast a quick glance at the picture [above] to understand the true value of everything in a world in which the monetary fabulation of the past 99 years is finally unwinding.

One picture in this case is absolutely worth well over a thousand words.

I'm no Paul Krugland, mind you, but I've read enough history to predict what happens to a society that engages in massive, unchecked money-printing operations.