But I'm certain this has nothing to do with open borders and terrorism. 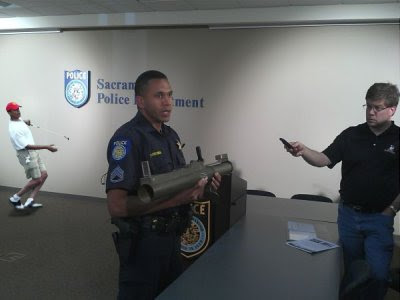 More than a dozen guns, ammunition and a rocket launcher were taken from a Sacramento home, including some found hidden behind a fake wall.

Sacramento police officers said they made the discovery on Wednesday.

Sacramento’s Explosive Ordinance Disposal Unit responded to the home to ensure the scene was safe.

The investigation is ongoing, so investigators are not releasing the names of the suspects at this time.

Say, I've got an idea! Let's keep the border wide open, sue states that try to enforce immigration laws, and promote general lawlessness! Oh, wait. You say the president's already doing all that? Forget I mentioned it.

That rocket launcher doesn't have a rocket. Over hype much?

No name characters arrested!!! Wanna bet if names are ever released they will be Mohammed or Akbar, or Akhmed!!. A longer shot would be some Mexican cartel types.

But, but I thought the War on Terror was over. The State Department said so. These weapons couldn't have come in through an airport — they catch all the weapons, don't they? And only nice people come in over the border —potential voters. Such a puzzlement.

Yes, because a live RPG round needs to be displayed by the police.

See if Fast and Furious left any of the price tags on them?

Not an RPG, a LAW. It is expended. No rocket. The Police have no live round to display.

Yeah, Doug. It was already fired, so you must be over-hyping.

"Inside, officers found several illegal and stolen weapons, and weapon parts. They were placed around the house, and some were behind a false wall."

Sounds like a righteous bust to me but what I really want to know is,the hell is that guy in the background of the pic doing?

Assault Pistol? What, does it have a bayonet lug on it? I'm with Anon 3:36, plus just about *any* firearm in the house could be labelled "illegal" due to California's gun laws.

Any stolen weapon would be deemed illegal now wouldn't it? Considering there were stolen weapons as well as weapons hidden behind a false wall, the assumption should be that there were no legal permits for any weapons, deeming them all illegal.

FYI: That LAW rocket launcher is either A) empty, or B) being held by the dumbest human being alive, because extending the tube like that *ARMS* the rocket inside, and one wrong touch could make the photo op a *lot* more interesting.