Erstwhile presidential candidate and world-class philanderer John Edwards is profiled Wednesday in a monumental Atlantic article entitled "Why the John Edwards Trial Is a Bigger Deal Than You Think." 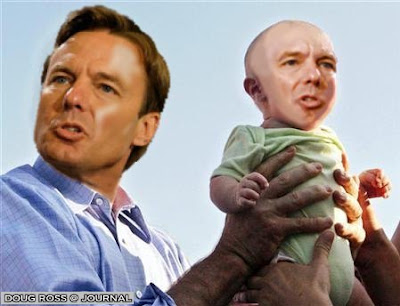 Jury selection in the federal criminal trial of John Edwards begins Thursday April 12th in a Greensboro, N.C., courtroom. As the world now knows, Edwards chose to cheat on his cancer-stricken wife during his 2008 presidential run. Two wealthy political supporters then spent hundreds of thousands of dollars supporting Edwards's mistress as part of a failed effort to keep the affair quiet. Prosecutors decided that the financial support constituted unreported, excessive and thus illegal campaign donations, and indicted Edwards for his role in the arrangement.

Author Hampton Dellinger does yeoman's work in avoiding the D-word over the course of the 1,800-word tome, which could be applied copiously to the dirtbag, douche, and dimwit in question.

However, Dellinger does manage to slip in the word Republican a scant five times.

In one respect, Edwards was right. There really are two Americas: the Democrat-media elites who think they are our betters, and the rest of us.


Update: Tom Blumer notes that the author ran for Lt. Governor in NC as a... Democrat.

More hilarious. The author is a former candidate for NC lieutenant governor -- as, of course, a Democrat.

And yet versions of "politic" show up 15 times.

And, his Diddy is Walter Dellinger, the Clinton Solicitor General and law prof booster for all things Democrat, such as the ACA.

"Journalists" knew about JFK's womanizing too and spiked the story like they did the Edwards mess. They were proud of it. Kennedy would most certainly have lost to Nixon, considering how close the 1960 election was -- decided by dead voters in Illinois and LBJ's Texas.

Then take an interesting if imaginary trip through subsequent history: with both JFK and LBJ missing, do the now-proven failures of Viet Nam and the Great Society ever take place?

All because "journalists" protected their boys. There is a reason I don't believe what the MSM shovels.

Mitchell mentions the article's author being related to Walter Dellinger--maybe someone knows if there is a relation to David Dellinger, one of the attorneys who defended the Chicago Seven ca. 1969-70.

Martin, David Dellinger was one of the Chicago Seven. Their defense was led by William Kunstler. He is not related to Walter Dellinger, at least directly.

See if they used the words sleazeball or scumbag, as these are common synonyms for "Democrat".

This must be the first thing they teach in "journalism school".