What an Obama second term means to Bishop Jenky: a Hitlerian end to Catholic institutions and the means to accomplish it

Angrily condemning President Obama for his “radical pro-abortion and extreme secularist agenda,” an Illinois bishop likened his leadership to Adolf Hitler and Josef Stalin last weekend and urged Catholics to vote against him. 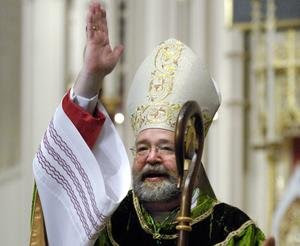 “This fall, every practicing Catholic must vote, and must vote their Catholic consciences, or by the following fall our Catholic schools, our Catholic hospitals, our Catholic Newman Centers, all our public ministries—only excepting our church buildings – could easily be shut down,” said Bishop Daniel Jenky of Peoria at a gathering of Catholic men on Saturday... "...no Catholic institution, under any circumstance, can ever cooperate with the intrinsic evil of killing innocent human life in the womb,” he said...

The bishop warned that because of the president’s mandate for forcing religious employers to fund contraceptives, sterilizations, and abortion-inducing drugs, America is on a path leading to the state of past dictatorships when Christians were forced to “huddle and hide,” such as Bismarck’s Kulturkampf, Hitler’s Nazis, and Stalin’s Communists.

“Hitler and Stalin, at their better moments, would just barely tolerate some churches remaining open, but would not tolerate any competition with the state in education, social services, and health care,” he said.

“In clear violation of our First Amendment rights, Barack Obama – with his radical, pro-abortion and extreme secularist agenda, now seems intent on following a similar path,” he added.

I'd like to remind you of a pair of bizarre Obama statements, one just prior to his election and one just after.

But first, let's set the stage by recalling a 2011 missive from John Podesta, one of Barack Obama's key 2008 campaign advisers. In a position paper, Podesta laid the "D" card on the table for all to see.

No, not "depression". We've already got that.

I'm talking about a de facto "dictatorship". Bypassing the will of the people -- as if that hasn't happened enough in the last three-and-a-half years -- through a set of unconstitutional Czars, Executive Orders, unilateral declarations, and the massive administrative state.

And armed force, if necessary, according to Podesta.

Fine. If it's not a dictatorship, please tell me what you would call the form of government that Podesta calls for?

Because it's certainly not a representative republic nor Constitutional in any way.

The U.S. Constitution and the laws of our nation grant the president significant authority to make and implement policy... The ability of President Obama to accomplish important change through these powers [including executive orders and armed forces] should not be underestimated [in] continuing to make progress.

Now back to Obama's pair of statements, which got very little publicity despite their highly inflammatory and un-American nature.

After the last three-and-a-half years, can there be any real doubt as to what Obama meant?

And what George Soros John Podesta is after?

The Left used to enjoy calling Bush a fascist, but the closest thing this country has ever had to a dictator -- from the iconography to the vicious language to the unconstitutional power-grabs -- is Barack Obama.

Old media did its level best to suppress these bizarre sentences. And the Soros tools at Media Matters claimed, in their usual Riefenstahl-esque way, that Obama didn't mean what he meant.

Without an election hanging over his head, and given his swelling list of outrageous, extra-Constitutional activities, can there be any doubt what lies ahead should this man serve a second term?

I will vote for a soup can over Barack Obama in 2012. Because this country -- and the Constitution -- simply cannot survive his reelection.

I'll take your "soup can" and raise you one damp dish rag.

People are coming out of the woodwork to distance themselves from the Democrat party and the best the Republican party can do is Mitt Romney?

We live in sad times.