Well, this certainly smacks of desperation: 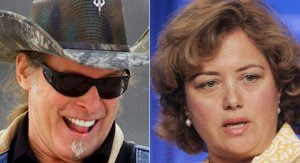 Progressive bloggers erupted in fury over controversial comments about President Barack Obama by rocker Ted Nugent and complained about a lack of media coverage, especially compared with the super-saturation reporting on Hilary Rosen’s remarks last week about stay-at-home moms.

Nugent, who has endorsed Mitt Romney, said over the weekend, “We need to ride into that battlefield and chop their heads off in November … “If Barack Obama becomes the president in November again, I will either be dead or in jail by this time next year. … Our president, attorney general, our vice president, Hillary Clinton — they’re criminals, they’re criminals.”

Get the difference, nincompoop?