The Democrat candidate for governor in Virginia is a bizarre little man named "Crazy" Terry McAuliffe. McAuliffe's background is especially troubling, given his incessant efforts to turn Virginia into a forced unionization state. 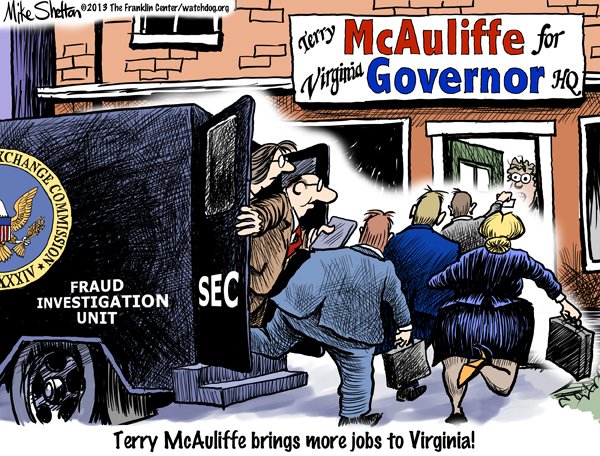 ...GreenTech’s Solyndra connection won’t surprise Kimberley A. Strassel. Back in April, the Wall Street Journal columnist wrote, “GreenTech is the latest proof (after Solyndra, Fisker, A123 and others) that the political class is adept at hooking up cronies and investors with taxpayer dollars. But creating jobs? No can do.”

Documents released last week reveal that that Securities and Exchange Commission is investigating GreenTech’s sister company Gulf Coast Funds, stating that there’s “possible fraud” in the firm’s pursuit of EB-5 investors, primarily those in China. GreenTech is behind schedule in rolling out thousands of electric vehicles while as many as 81 foreign nationals who invested at least $500,000 each are awaiting visas...

Virginians, if you want more Solyndras, more forced unionization, and more legalized theft of your private property, then by all means: vote for Terry McAuliffe. On the other hand, if you want to support a real Constitutional Conservative, then lend your support to Ken Cuccinelli.