THE SCIENCE IS SETTLED: No Global Warming For Nearly 18 Years

I wonder what the global warming   climate change   climate disruption grifters will have to say about this?

Remarkably, the El Niño warming of this year has not yet shortened the Great Pause, which, like last month, stands at 17 years 10 months with no global warming at all.

Taking the least-squares linear-regression trend on Remote Sensing Systems’ satellite-based monthly global mean lower-troposphere temperature dataset, there has been no global warming – none at all – for 214 months. This is the longest continuous period without any warming in the global instrumental temperature record since the satellites first watched in 1979. It has endured for about half the satellite temperature record. Yet the Great Pause coincides with a continuing, rapid increase in atmospheric CO2 concentration. 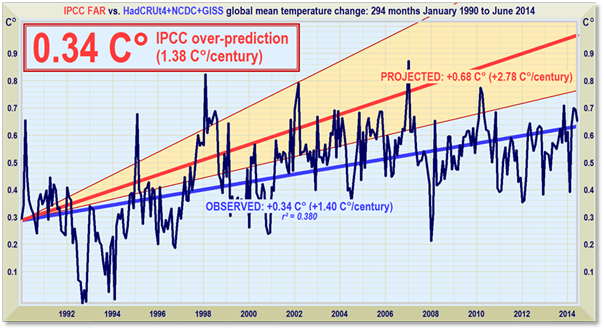 ..Yet the length of the Great Pause in global warming, significant though it now is, is of less importance than the ever-growing discrepancy between the temperature trends predicted by models and the far less exciting real-world temperature change that has been observed...

...The Great Pause is a growing embarrassment to those who had told us with “substantial confidence” that the science was settled and the debate over. Nature had other ideas. Though more than two dozen more or less implausible excuses for the Pause are appearing in nervous reviewed journals, the possibility that the Pause is occurring because the computer models are simply wrong about the sensitivity of temperature to manmade greenhouse gases can no longer be dismissed...

...[Any r]ecent extreme weather cannot be blamed on global warming, because there has not been any global warming. It is as simple as that.

According to http://surfacestations.org, 6% of the 1,000 automated surface stations they have surveyed (out of 1,200 total) that are used to record temperature are sited in locations that result in their recorded temperature being 5 or more degrees Celsius high due to local effects (like being sited in the middle of an asphalt parking lot), and another 64% are sited in locations that result in readings 2 to 5 degrees high. When readings from sites that have been well sited for their entire "life" are looked at, such as the one in Orland, CA that is shown on their home page that has been well sited for over 100 years, we're cooler than the 1930s, and way cooler than the 1880s.

The reason that the phrase “Global Warming Deniers” is used is that the “Deniers” ignore demonstrable evidence, and fabricate stories and “facts” that are not true.

For example, the claim
“No Global Warming For Nearly 18 Years”
is NOT true.

Despite the fantasies of Global Warming Deniers, the earth continues to warm at the rate of 4 Hiroshima atomic bombs per second – running 24/7 - including the years from 1998 to present.
http://www.skepticalscience.com/4-Hiroshima-bombs-worth-of-heat-per-second.html
Earth’s Rate Of Global Warming Is 400,000 Hiroshima Bombs A Day
http://thinkprogress.org/climate/2013/12/22/3089711/global-warming-hiroshima-bombs/#
Four Hiroshima bombs a second: How we imagine climate change
http://phys.org/news/2013-08-hiroshima-climate.html
This measured/observed warming rate is via the Argo buoy system. http://www.argo.ucsd.edu/About_Argo.html

2005 was warmer than any previous year. Then 2010 broke the 2005 record. Data at:
NOAA/National Climate Data Center
https://www.ncdc.noaa.gov/monitoring-references/faq/anomalies.php

2012 was the warmest year on record for the United States.
http://www.ncdc.noaa.gov/news/ncdc-announces-warmest-year-record-contiguous-us

Sea level continues to rise due to thermal expansion and glacial melting. The rate of sea level rise has quadrupled since the 1870 to 1924 period.
Columbia University
http://www.columbia.edu/~mhs119/SeaLevel/

Glaciers continue to melt, and the rate of melting has accelerated since 1998.
World Glacier Monitoring Service
http://www.wgms.ch/mbb/sum12.html

Ocean heating has accelerated sharply since 1998. (Note: Over 90% of Global Warming ends up heating the oceans.)
Graph at:
http://www.durangobill.com/GwdLiars/GwdOceanHeat.jpg
Full peer reviewed paper at:
http://onlinelibrary.wiley.com/doi/10.1002/grl.50382/full
Up to date info at:
NOAA/National Oceanographic Data Center
http://www.nodc.noaa.gov/OC5/3M_HEAT_CONTENT/ (click on “2”)

Finally, May and June 2014 were the warmest May and June in recorded history. The 12 month period ending in June 2014 was warmer than any previous calendar year.
NOAA/National Climate Data Center
https://www.ncdc.noaa.gov/monitoring-references/faq/anomalies.php

The actual observations show that global warming didn’t stop in 1998. What is happening is that a few Global Warming Deniers fabricated a story, and the other members of the Global Warming Denier cult continue to demonstrate their willful ignorance by repeating the same false story.

Anyone paying attention is aware that climate has always changed. The uptrend accompanying the Industrial Revolution began at the depths of the Little Ice Age (approximately 1700) and progressed with 32 year up trends and less steep down trends through the 20th century. It became known as Global Warming (GW) during the comparatively steep rise in the last quarter of the 20th century.

Two natural drivers of climate change have been identified that explain measured average global temperatures since before 1900 with R2 >0.9 (95% correlation) and provide credible estimates back to the low temperatures of the Little Ice Age (1610). CO2 change is not one of them.

The method, equation, data sources, history (hind cast to 1610) and predictions (through 2037) are provided at http://agwunveiled.blogspot.com and references.