Great find by Red State's Moe Lane as White House spokes-idiot Jay Carney does his level best to weasel away from the disastrous Hilary Rosen implosion.

Rosen, of course, had pilloried mother-of-five, MS sufferer and breast cancer survivor Ann Romney as being out of touch and having "never worked a day in her life".

And, as Michelle Malkin reveals, Rosen had also visited the Obama White House a stunning 35 times.

First of all, I haven't seen the records, uh, I don't, uh, know that Hilary Rosen, I know three [holds up three fingers] personally -- women named Hilary Rosen -- and don't know those represent the person we're, uh, talking about. Necessarily. 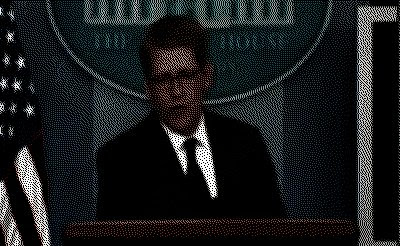 So I really can't comment on the number of visits, 'cause I'm not sure that's accurate.

Rosen visited the White House 35 freaking times, including five visits to the president himself, one to David "Red Diaper Baby" Axelrod, three to Valerie "Grove Parc" Jarrett, and another to the Maoist Anita Dunn.

And Carney's never heard of her. I would give my Media Matters Kruggerand to Carney if he'd agree to an interview while strapped to a polygraph.

It's not that Carney didn't know who she was. It was that he KNEW TOO MANY Hilary Rosens! See? Life is simple in lala land.

Bob Gibbs once claimed the same regarding Malik Shabaz's name on WH visitor logs. "A very common name, could've been anyone."

Eggzactly how is the Republican War on Women working out?

Have we been able to yet achieve a single victory?
.

No matter who -- clinton-- bushII -- barry...since the First Gulf 'war' all have learned from saddam hussein to have a front man like Bagdad Bob...!!! BECAUSE AMERICANs ARE GULLIBLE AND STUPID!!!