The "Million Vet March" in Washington D.C. appears to be escalating as reports of barricades being torn down, police in riot gear and snipers being deployed, and a growing crowd at The White House chanting for its shut-down suggest the people are growing restless. 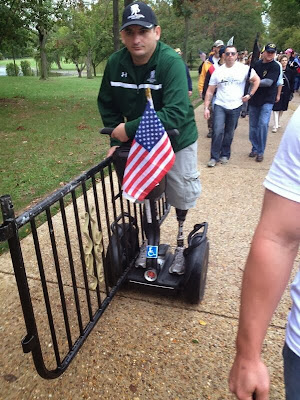 Protesters have gathered in front of the White House in Washington, D.C. on Sunday, according to reports. 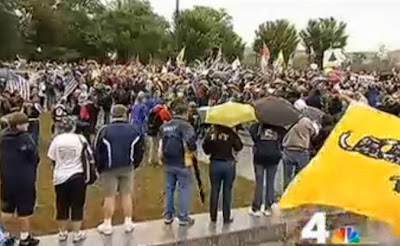 Park police in riot gear were deployed in front of the building.

A rally took place at the World War II memorial and headed to the White House, reported NBC Washington. Several thousand demonstrators came out, it said.

NBC reported that people were carrying barricades that were likely from the WWII memorial to the White House area.

The DC Police Department said its officers are on the scene.

“MPD is on the scene at White House with USSS & USPP concerning protest – marchers using sidewalk,” it wrote on Twitter.

Commentator Sarah Palin and Senator Ted Cruz (R-Texas) were on the scene and spoke to demonstrators.

The organizers of the protest described themselves as the “Million Vet March.”

It said that veterans and military members are “being used a political pawns in the ongoing government shutdown and budget crisis,” its website reads.

Jeff Tompkins, a protester, told NBC that  “it should be open to everyone to come down here and see this … this is not just and not fair,” referring to the WWII memorial.

Snipers at the ready atop the White House as the crowds gather... 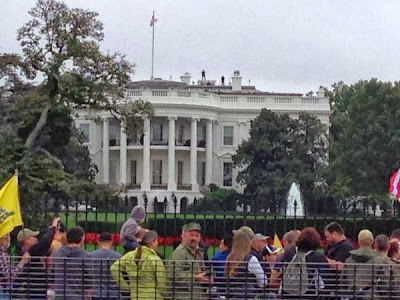 Barricades Torn down at the Lincoln Memorial People carrying them to the White House to Barricade the White House http://t.co/EdIkV21vXF—
F.R. Newbrough (@FR_Newbrough) October 13, 2013

Now, the protest continues outside of the White House.

Something is going down at the White House today… http://t.co/ThxvQBJa9Y—
Aaron Takahashi (@TakaHashtag) October 13, 2013

Snipers on the WH? Really?
These men must should themselves for Who and What are they acting. It certainly is not Liberty they are pawns in a clumsy show of force for a Petty Dictator.
To them the words worth repeating come from the first Borne movie where an assassin is shotgunned and the protagonist says, "look at what they made you give, look at what they made you give", meaning it just wasn't his life but it was the way of life imposed on him.
Barry is an Interloper, indeed, he must go.

well to be fair, I'm pretty sure there's always snipers on the White House roof.

There were snipers on the WH roof last April when I visited.

If those are snipers on the roof, they're stupid for making themselves into silhouette targets.

You guy's jump on the story link and check out the comments!

A 2nd Revolution from tyranny is in the air.

"Mohammed Morsi is sitting under house arrest watching this on TV right now. He's probably jumping up and down on his couch screaming "See! SEE! SEE!! How do you like it now Mister Big Smarty Pants American President?"

"BREAKING: Washington Redskins drop "Washington" from their name because it's embarrassing."

"This is nothing, just an appetizer. Just wait for the Food Stamps crowd to show up once there is no money for the free meal."

thank you for such great tweets! one proud American trucker V
Vets daughter!

I've never been prouder of our veterans.I've never been more embarrassed by a president and his goons.Snipers on the White House when citizens protest peacefully.Where was that kind of protection in Benghazi,petulant child-in-chief?

Bravo.... I would NOT want to be the one to STOP OUR WWII VETS FROM WHAT THEY EARNED. God Bless our VETS. Much RESPECT FOR THOSE WHO FIGHT FOR OUR FREEDOMS.