Cue the Solyndra executives slapping themselves on the foreheads as they wonder why they went into solar panels when building a non-functional, $400 million website would be much, much easier. Patrick Howley has all of the details. 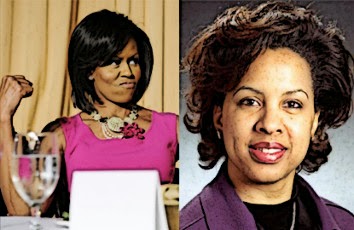 First Lady Michelle Obama’s Princeton classmate is a top executive at the company that earned the contract to build the failed Obamacare website.

Toni Townes-Whitley, Princeton class of ’85, is senior vice president at CGI Federal, which earned the no-bid contract to build the $678 million Obamacare enrollment website at Healthcare.gov. CGI Federal is the U.S. arm of a Canadian company.

Townes-Whitley and her Princeton classmate Michelle Obama are both members of the Association of Black Princeton Alumni.

...As reported by the Washington Examiner in early October, the Department of Health and Human Services reviewed only CGI’s bid for the Obamacare account. CGI was one of 16 companies qualified under the Bush administration to provide certain tech services to the federal government. A senior vice president for the company testified this week before The House Committee on Energy and Commerce that four companies submitted bids, but did not name those companies or explain why only CGI’s bid was considered...

These Chicago politicians are truly something to behold. In a sane society, the entire crew would be the subject of a RICO indictment.

Valerie jarretts daughter and son in law work there too.

Ref:"First Lady Michelle Obama’s Princeton classmate is a top executive at the company that earned the contract to build the failed Obamacare website."

Did you say, "earned" ...that's an understatement. I say it was a well planned event to further bankrupt the country. I also firmly believe that 'failure' was built into the program...these people know exactly what they're doing...more than likely Valerie Jarret had her paws in the mix. What exactly goes on behind the scenes we may never know but If one were to study Obama and company long enough you would come to the conclusion that Obama and company is intentionally destroying the country...he promised that from the very beginning..."We will fundamentally change the country." ...and he did just that!